The unidentified warm-up act had audience members up on stage singing. The foreground beer does not reflect any endorsement of the consumption of alcoholic beverages on my part.

One of the interesting aspects of conferences is the really cool and exciting event planned for one night of the conference to make our customers feel like they got to experience something special.

While I could worry about how many people could be employed for the same amount spent on such special events, in a time when there are no holiday parties, no fancy dinners, limits on spending that make it difficult to get a new pencil, and no excesses in spending in any part of the budget, it’s kind of nice to get to be there to experience something really grand. 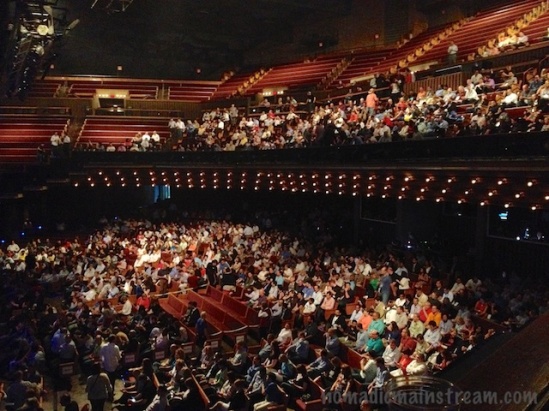 And grand it was.  In fact, it was in the Grand Ole Opry–that makes it grand by definition, even if the Grand Ole Opry isn’t so old anymore having been moved to the Opryland resort outside of Nashville in 1974.  Well, maybe that is old?

If you look carefully of the photos that include the stage, you can see a light circle in the wood in the stage.  That circle was cut from the stage in the previous home of the Grand Ole Opry, Ryman Auditorium, in downtown Nashville.  I got to see Ryman Auditorium from the outside when I diligently followed the directions my GPS provided, taking me to the former Grand Ole Opry location in spite of the fact that the Grand Ole Opry hadn’t been located there since long before the invention (or at least the availability of) GPS.

Gin Blossoms had the place hoppin’ with lots of audience participation

What was amazing, was to be at a conference of about 3500 people and to have the entire Grand Ole Opry to ourselves.  Although its maximum capacity is limited to a surprising 4400, we still had plenty of space up in the balcony at stage left to sprawl in our seats. 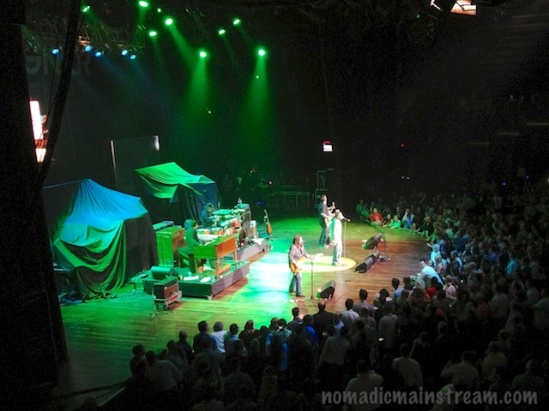 Uncle Kracker was probably also exciting, but this is about when I went out to get a beer

What was most impressive was the all-out attitude of all three performances.  I can imagine for any of those bands, who enjoyed huge popularity at one time in their history, playing to a corporate conference audience could have been a bit of a let down.  If they were disappointed, they kept it well hidden.  They had us all rocking right up to the last chord.  I can’t remember the last time I had so much fun at a work conference.

iPhone Photographers note:  While the iPhone made for the best camera because it was the only one I would have carried with me during a work conference, adding a telephoto attachment might have made for some better images from the stage.

One response to “Blast from the Past(s)”