A wide view of the Evening Primrose in a meadow

I was walking in the park about a week ago.  It was probably a weekend day fairly early in the morning.  As Tisen and I emerged from the building, we spotted a young couple in the shadows of the hillside in the early light.  I suspect they had been out all night behaving romantically.  At the moment I saw them, they were gathering a bouquet of flowers from the hillside.  Flowers that had magically appeared almost overnight after holding out through one cold snap after another.

A clump of evening primrose

I felt bad for those flowers–to be heartlessly neutered after having waited so long for the chance to procreate.  It struck me as ironic that the young couple who were clearly caught in the throes of hormonal influences would be the ones to remove the sexual organs of the plants carrying on their own romance on the hillside.

Part of me was tempted to ask the couple how they would feel if they were quietly carrying on wooing one another and some giant came along and plucked their genitalia, but I thought better of it.  It’s hard not to come across as insane and potentially dangerous when you start using words like “plucked” and “genitalia” in the same sentence.

A couple of blooms filling their cups with light

I glanced at the sign that read, “Flowers are here for everyone to enjoy.  Take nothing but photographs; leave nothing but footprints” posted about 20 feet from where they were gathering their bounty.  I considered lecturing them on the inconsiderateness of taking flowers, not only taking from this season, but also stopping the offspring for future seasons to come.  Once again, I decided to hold my tongue.  Perhaps the act of thinking about saying something but not caused me to stare at them in some way that made them uncomfortable.  Whatever the cause, they made their way off the hillside and stopped their pillaging.

Having witnessed this act, I was doubly happy to notice the sea of flowers taking over the hillside this week.  The evening primrose, a lovely native, seems to have found its way into every space between the other grasses and flowers growing in the park.  They seem to have reached some sort of equilibrium that allows space for a wide variety of flowers at the same time. 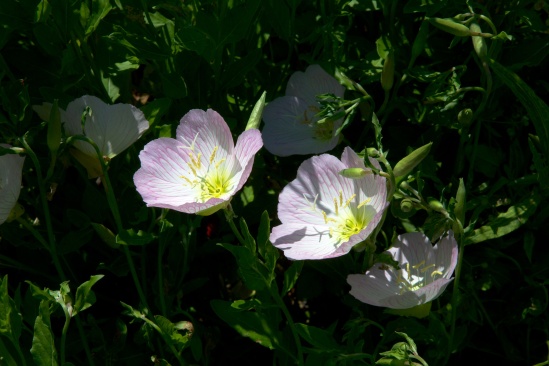 The last, but maybe the best

The evening primrose was looking particularly sparkly about 2 hours before sunset the other day.  Like the blades of grass in yesterday’s post, I had a hard time not shooting it and an even harder time reducing my rather redundant set of photos to just 1.  I guess this was my way of gathering my own bouquet.