Tisen is experiencing the emotion of conflict of interest.  He loves Twiggy and he loves his mommy.  He just isn’t sure how to love both of us at the same time.

If Tisen and I were two humans with the same relationship, we would be in therapy.

I have never understood possessive, jealous people.  Any guy I ever dated back when I was a single person (E-gads!  It’s been decades ago!) who had issues with me having friends, having a career, and having interests separate from his didn’t last long.  (Well, excepting my first “adult” boyfriend, but that’s another story.)  I guess because I identify with Tisen in more of a mother-son sort of way, his possessiveness and jealousy seem simultaneously more strange and more tolerable.

Perhaps more tolerable because I don’t actually have to argue with Tisen and convince him that he’s nuts for being upset that I’m petting Twiggy.  I just pet Twiggy and let him deal with it.

It’s also more tolerable because it’s amusing to watch Tisen flip back and forth between wanting to play with Twiggy and wanting to remain between her and me.  When Twiggy moves away from me, he grabs and toy and follows her, trying to get her to play tug-o-war or keep away.  When Twiggy comes back my way, Tisen drops his toys, dives head-first onto the sofa, often landing completely across my lap.

Of course, Tisen eventually wears himself out and decides he really can share me.  Then Twiggy happily sits next to me and raises a paw so I will rub her armpit. 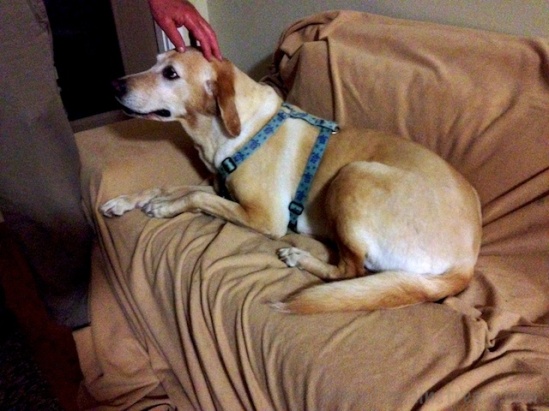 Low light and motion are not ideal conditions for shooting with the iPhone.  One thing that might have been helpful would have been to turn on the flash.  I’ve found using the feature in Camera! that turns the LED light on like a flashlight works better than using the LED like a flash.  It helps the phone find focus for one thing.  But, I think I end up with a faster shutter speed this way.  I’ll have to test this theory.

In any case, with so much excitement going on, catching either dog in a moment of “paws” (sorry for the pun) was a bit challenging.  Without the LED light on, the iPhone takes a very long time to find focus and fire, which makes getting decent images of moving dogs even more challenging.

Our guests and Tisen (Big Dog is also on the floor, partially cut out of the frame)

This is the kind of situation where, if you want an image to capture a memory and you’re not really after a specific look, the iPhone is just fine.  But if you really want a stop-action kind of shot, a DSLR would be a much better choice.  Or even just a point-and-shoot with fully manual control and higher ISO settings.

None-the-less, I enjoy any pictures of the dogs.