In spite of our non-compatible species issues, Gilbert always makes me smile

Gilbert is a special boy.  He’s an American Kestrel who was “rescued” by some well-meaning people when he didn’t need to be rescued.  He became a “human imprint.” Perhaps you’ve heard stories about ducks following around a person after seeing them immediately after hatching, but imprinting behavior applies to all birds and isn’t limited to the first thing a newly hatched bird sees–a young bird can imprint on whoever its caretaker is after it hatches.

Besides not being able to survive in the wild, there are some other problems associated with human imprints.  Gilbert is experiencing one of those right now–he has biological urges.  But, as a bird who thinks he’s a person, this is rather complicated.

Poor Gilbert wants a girl, but he’s more interested in humans than he is in other Kestrels.  This seems to be true in spite of the fact that it’s not clear Gilbert can distinguish between a female human and a male human.  He talks continuously as soon as he hears a voice, clamoring for affection.

If Gilbert were a dog, we would say he was barking up the wrong tree.  Gilbert isn’t so different from humans in this respect.  While he may be suffering from species confusion, many of us humans suffer from equally self-destructive confusion when it comes to selecting a mate.  From what I remember, Gilbert could relate to human dating confusion such as:

Showing off Gilbert’s wings and tail

Small children were fascinated by Gilbert

I wish I could explain to Gilbert why he needs to either figure out how to be attracted to female Kestrels or join the priesthood, but I don’t speak Kestrese.  In the meantime, Gilbert sings to me, telling me how handsome he is, how energetic he is.  He tries to convince me we will make a beautiful couple.  I don’t have the heart to tell him that he and I can never be together.

Instead, I make cooing noises and hope he finds it comforting. 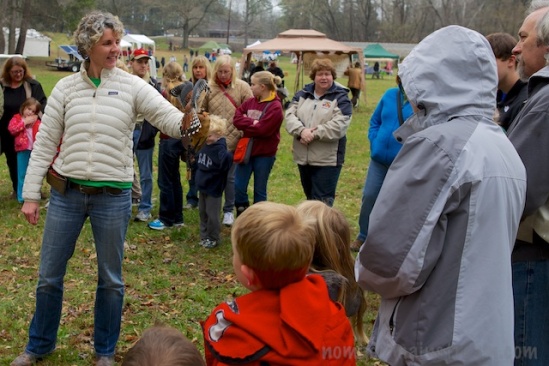 Gilbert may have trouble getting a girl, but he sure is a crowd pleaser

*Note:  All photographs in today’s post taken by my husband; edited by me.

One response to “Gilbert’s Sour Grape”