Since I worked too late to have time to do much experimenting with either my iPhone or my DSLR tonight, I decided it was a good time to review photos taken with my iPhone and determine its limitations and advantages.

I decided to pick only iPhone photos of Tisen and/or Twiggy, Tisen’s friend who sometimes stays with us.  When we run into Twiggy in the park, Tisen bounds up to her like he can’t believe how long it’s been since he’s seen her.  She seems less excited to see him.

Tisen is holding still; I am not

The first challenge with using a camera phone is stability–or, rather, lack there of.  This results in many slightly blurry images.  I believe there are several causes of the motion blur that occurs in so many of the shots that would otherwise be adorable:

An adorable puppy pile, except the blown out whites on Tisen and the blur from motion

I will have to experiment more with the rapid fire mode in the Camera+ to see if that helps at all.  With my DSLR, rapid fire mode helps to capture many images shot very quickly, increasing the odds that at least one of them will be sharp.  Of course, with my DSLR, I can control the shutter speed to help stop motion as well.

Haze from the light at the right

The second challenge relates to shooting in lower light situations.  I have taken to using the “flash” feature in my iPhone camera quite a bit when shooting Tisen and/or Twiggy.  This helps with the motion blur issues as well as the problem of a camera with a tiny sensor.  However, that introduces more issues: 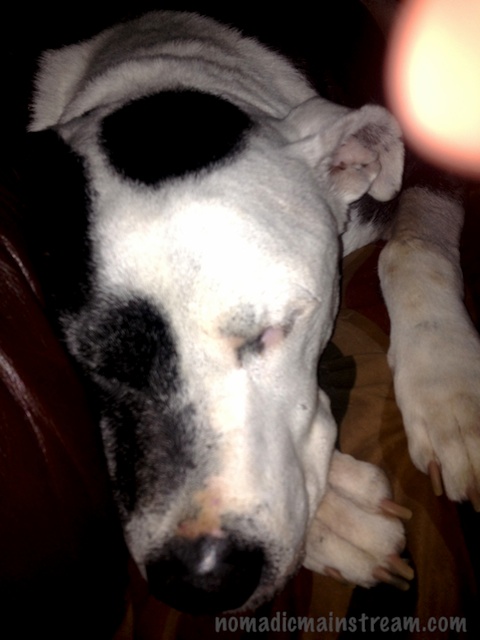 The sun light on the left side creates a hazy effect

The depth of field is quite amazing, however.  Although Twiggy’s head is blurred because she was moving, notice how the rug is sharp all the way to the front edge of the frame and Tisen is also sharp far in the background.

Sharp from front to back, except for Twiggy’s moving head

So, I need to work on finding a way to hold the camera more steady.  I also need to work on controlling lighting.  This is a bit counter-intuitive for me.  After all, I usually shoot with my iPhone because it’s the most convenient camera I have handy when something i want to capture is happening.  Usually with the dogs.  Trying to get light on my subject would likely result in him running away.  We shall see . . .