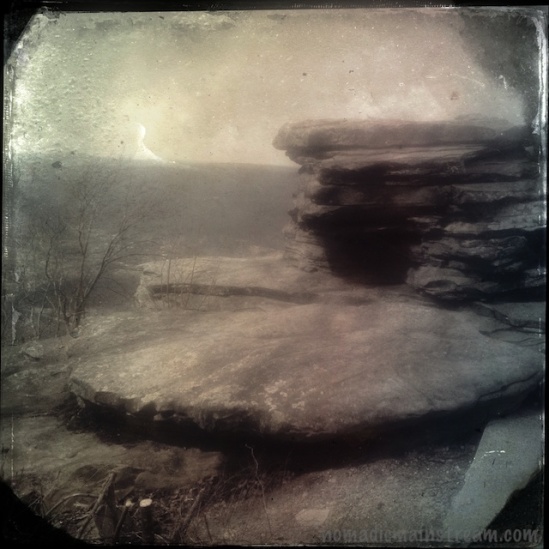 I like the rocks Hipstamata-sized. The first time we saw these rocks, a guy had just fallen off of them and broken his ribs.

Sunday afternoon, looking for something fun to do, we decided on an easy, short walk that Tisen could accompany us on.  Pat suggested Signal Point, but I felt the distance we could walk and the view we could see without any physical strain was too limited.  The easily accessible overlook is less than 50 yards from the parking lot. 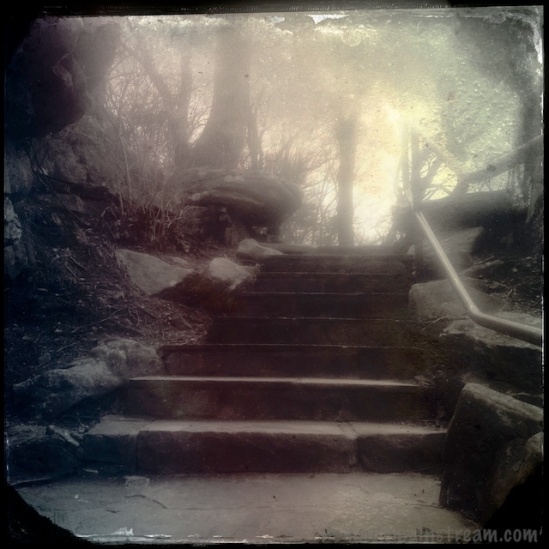 I suggested we head up to Point Park instead.  Point Park has what is probably a half-mile loop that’s flat and affords views from many directions.  Georgia, Tennessee, and Alabama are all visible from Point Park.  The view of Moccasin Bend is hard to beat.  And, there are monuments, canons, and interesting rock formations that would all allow me to continue my Hipstamatic spree.

Pat agreed and we headed up to the mountain.  The one disadvantage of Point Park is that they do charge an entry fee.  I don’t mind paying the entry fee–I want to support the park–but it does add up throughout the year given the number of times we take visitors up there.  When we got there, I stopped in the Visitor’s Center to ask if they have an annual pass.  The volunteer on duty didn’t know of anything specific to the park, but told me about the $80 annual pass to all federally managed lands.  He told me it included access to Yellowstone and gave me a pamphlet.

Looking down the trail at the museum at Ochs Overlook

While it was tempting to get an annual pass for all federal land, when we started trying to come up with a list of places we would use it in the next year, we couldn’t really think of $80 worth of places we would get to in the next 12 months.  We decided to wait and went to the park entrance to pay.  When we got there, there was actually a ranger staffing the ticket booth.  Usually you pay a machine.

I mentioned to him we’d thought about buying the park pass, but had decided to wait and he informed me that there is a $20 annual pass for just Point Park.  He called the Visitor’s Center volunteer for us and sent us back to pick one up.  When I got back to the Visitor’s Center, the volunteer was still on the phone with the ranger who was giving him instructions on where to find the pass.  We made it through the process, got our shiny new pass and headed back to the entrance.

The same ranger was still on duty.  When I handed him the new pass he had facilitated, he looked at it, looked back at me, and said, “We don’t take those here.”  Gotta love a ranger with a sense of humor!

We took a nice spin around Point Park, walking out to Ochs Overlook at the point and enjoying the spring weather.  The bright sunshine created an interesting haze in Hipstamatic. 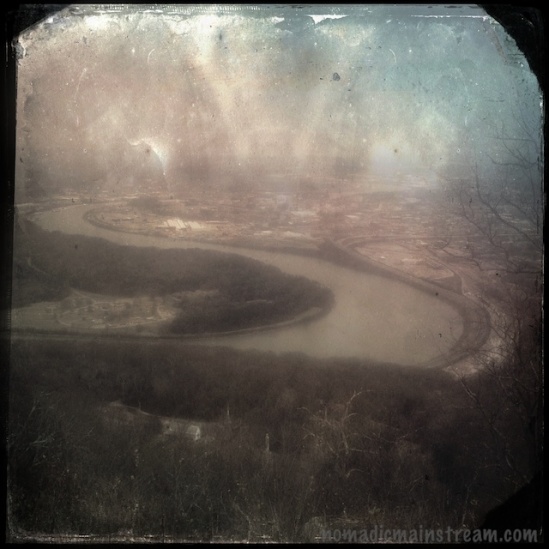 Mocassin Bend doesn’t actually fit in the iPhone frame from Ochs Overlook. This is the “bend.”

Afterwards, we headed home.  After a shower, Pat did a little more work on the computer with assistance from Tisen. 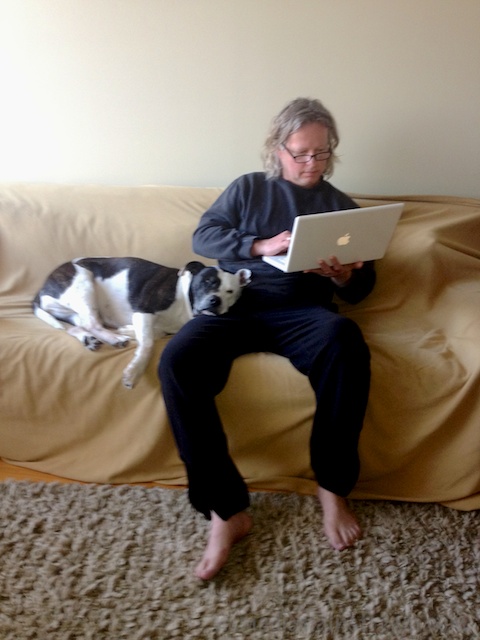 Tisen helping Daddy on the computer