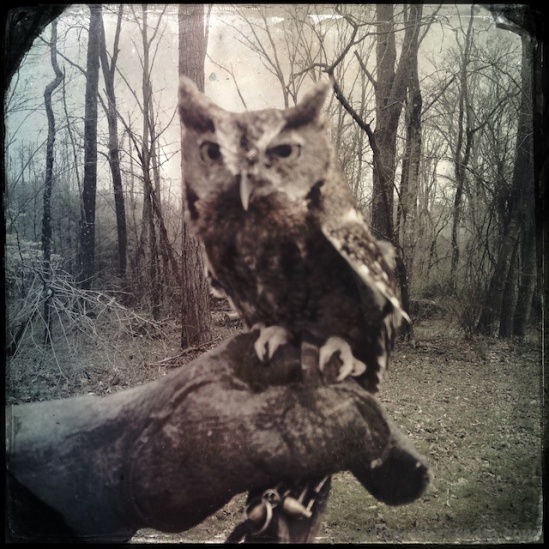 After spending a good hour or so entertaining a small crowd at the Little Owl Festival, the crowd began to thin out.  A handful or so hung around, petting Jerry the Screech Owl and asking the questions that didn’t get answered during the program.  A few stragglers wandered over in time to get a chance to see the birds.

In this moment of relative quiet, Paul with Artie, I with Gilbert, and Megan with Jerry lined up for a photo op.  We lined up in this order because Artie has a way of making Jerry nervous–in the wild, Jerry would be prey for Artie.

Gilbert suddenly started a shrill alarm call, looking around frantically.  One of the remaining fans spotted a Coopers Hawk in the woods.  It took several minutes of pointing and moving about for the half dozen or so humans hanging about to spot the hawk.  Gilbert had spotted his mortal enemy without so much as turning his head.  I remain bewildered as to how he noticed the hawk slip into the woods 500 yards away.

At the same time, Gilbert doesn’t have the same reaction to a Barred Owl sitting 3 feet away.  With me and Gilbert between Jerry, a tiny Screech Owl, and Artie, all would have been quiet were it not for the Coopers Hawk in the woods. 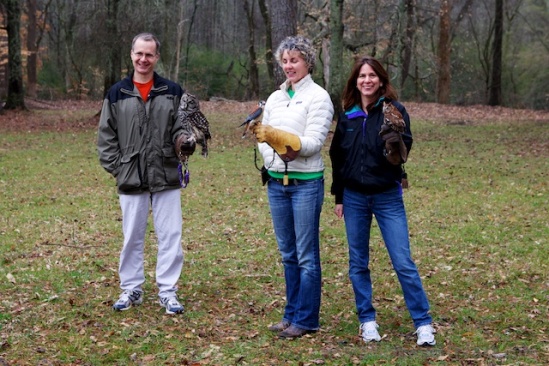 Pat managed to get a series of shots in any case.  In the meantime, the last remnants of the crowd faded off to the next act, leaving us to pack up the birds and call it a day.  Pat and Dale had a face-off with the cameras before we went our separate ways. 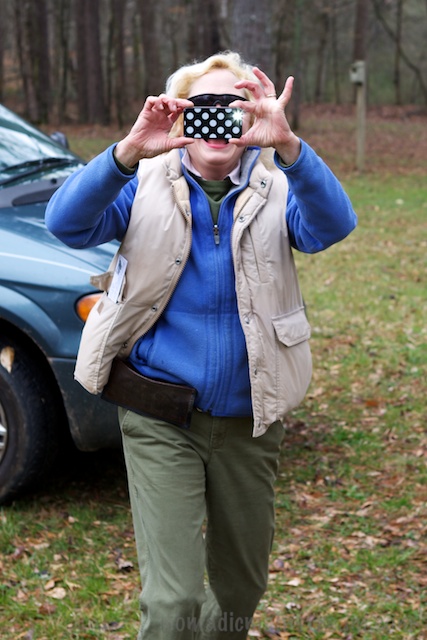 Dale wins in the camera battle with her polka-dotted case

I walked across the field back to our car feeling high.  I stopped to visit with the Audubon folks at the tent selling tickets and couldn’t stop smiling about how much fun it had been to share the birds with the audience.  I think they might have been jealous.

We loaded into the mini-van and headed down the road talking about where we should have lunch.  As we rounded a curve through the wooded neighborhood that surrounds Audubon Acres, we spotted a huge flock of wild turkeys, with what appeared to be a dozen toms strutting about displaying their plumage, competing for the attention of the hens.

I, of course, called to Pat to stop the van as I grabbed the camera, hopped out of the car, and tried my best to get a shot without scaring them off.  Wild turkeys are not very cooperative, I’ve found.  They look perfectly content to hang out in the open like they own the world and there are no predators they have to worry about until the moment someone shows up with a camera.  Then they seem to rapidly disappear.

My 24-70mm lens was no match for the distance the turkeys were able to cover in the time it took me to get lined up.  But, we enjoyed their show none-the-less. 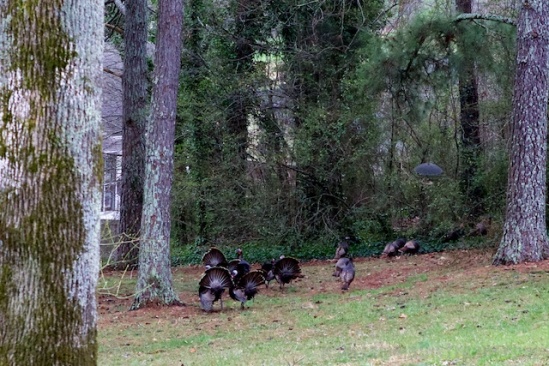 Wild turkey toms doing their best to attract a mate