Continuing our visit to the Tennessee Aquarium, I discovered a topic I never expected to write a blog post about.  Let’s talk about mouths for a moment, shall we?

Some mouths are terrifying.  Think Jaws.  Think Tyrannosaurus Rex.  Now, think Alligator.  Not so very different, in my book, than thinking about being bitten by a dinosaur.  After all, the American Alligator actually did live with the dinosaurs.

Even sleeping the alligator looks menacing

The relatively small Alligator that lives in a rather cushy environment in the Tennessee Aquarium by Alligator standards (I should think), chose a rather interesting spot to hang out for an afternoon nap.  The only thing that would have made his choice of places to sleep better would have been if the glass would have been antiglare.  Since I can’t imagine the aquarium staff has been training the alligator to nap where it can be viewed up close, I’m guessing this little nook was designed to be exactly what an alligator looks for when it comes to nap nooks to increase the odds that visitors would get to admire this guy’s teeth up close.  They sure are white.  There is something disturbing about an animal whose teeth are so prominent they don’t fit inside its mouth when it’s closed. 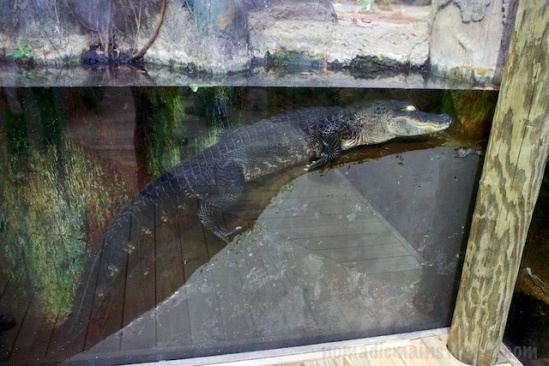 Catfish are another creature that has a scary mouth.  They also co-habitated with T-Rex.  Perhaps I have stumbled upon a pattern?  While the teeth of a catfish may not be so prominent or sharp as the alligator’s, there is just something downright menacing about the way their mouth looks to me.  It comes as no surprise that there are several types of catfish who have been rumored to kill people (although not substantiated).  This catfish was enormous.  While not even close to the top of the scale for big catfish, he seemed big enough to swallow a small child whole.  I don’t think this catfish actually has any interest in eating small children, fortunately.  His markings make me think of my dog, making him a whole lot cuter than most catfish. 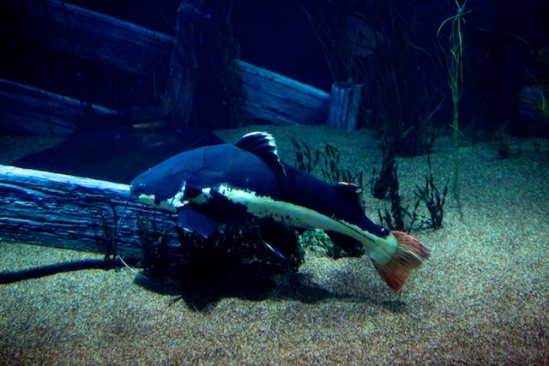 This guy doesn’t look so scary with his back turned

The next in our series of mouths is a crazy turtle.  An alligator snapping turtle, to be exact.  Unfortunately, his lure doesn’t show in the shot (through thick glass), but this guy hangs out with his mouth open and wiggles a lure that is part of his tongue to attract fish.  An underwater fisherman.  I’m just guessing, but I suspect this guy may be even older than the alligator–he looks like a rock. 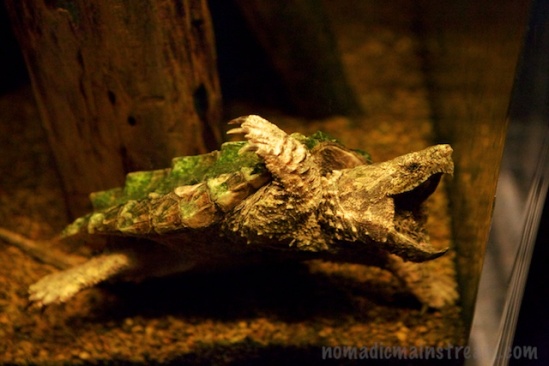 So frozen people stop to ask if he’s dead, this guy waits for imaginary fish to swim by

I don’t recall the name of the next open-mouth participant in today’s post.  I assume he is gathering something edible by filtering the water, but he kept swimming around with checks billowing like sails.  I missed a shot of the inside of his mouth reflecting light and shimmering like a silver bowl.  He just glided by with his billowing mouth below his paddle of a nose looking some sort of bizarre submarine. 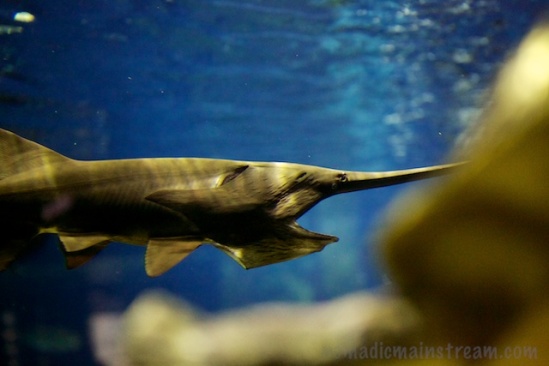 If this doesn’t speak to the diversity of the planet, I don’t know what does 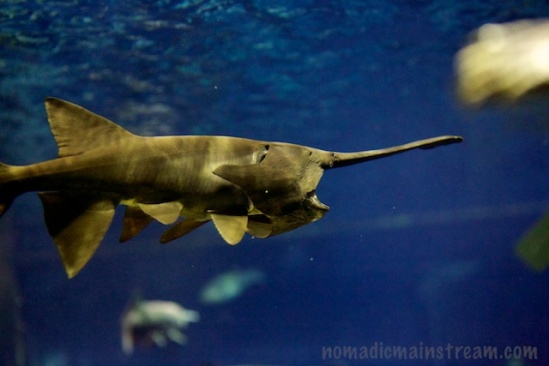 In the end, I was the one who left open-mouthed.