Flying in front of reflected trees

When we went to the Sandhill Crane Festival, we noticed some things about the cranes.  First, they are noisy.  They seem to spend a lot of time flying around, forming groups, calling to each other and circling.

It’s kind of like watching marching band practice when the band hasn’t been training together very long.  They seem uncertain about how to line up, who’s in the lead, or where they’re going.

They bugle their unique call endlessly.  It can be heard for miles. 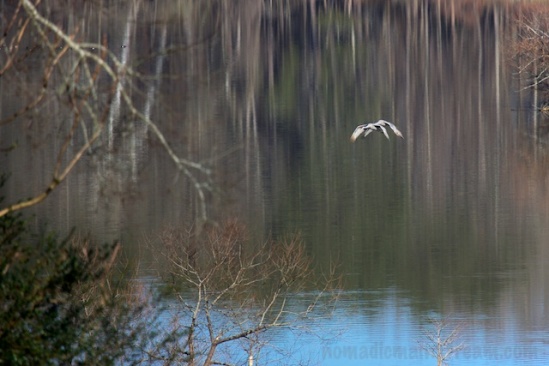 Their call is somewhat reminiscent of the sound my brother used to make when he’d sneaked up on me and was trying to terrify me.  My husband thinks it sounds more like a loud turkey, but he never heard my brother.

A “heard” (yes, it’s a pun) of cranes grazed in the grasses across the refuge from us.  The one bad thing about the Hiwassee Refuge and the Sandhill Crane Festival is that the birds are mostly very far away.  I know this is best, especially when there’s a crowd.  After all, the idea of a refuge is to give wildlife a place to be wildlife without being harassed or stressed by the presence of humans.  But, it does make it difficult to get good photos.  If it weren’t for the circling cranes who seemed to want to check us out, I wouldn’t have gotten much detail at all (see previous posts to see these photos).

You can probably tell we were far away from the group of cranes on the ground from this photo:

But it might not be obvious just how far away that really is–I shot it at 400mm.  In fact, almost all of my shots (except those with a long line of cranes flying) posted over the last several days were shot at 400mm.   Mind you, the Sandhill Crane is the largest bird found in Tennessee.  They are up to 4’ tall and have a wingspan of up to 90” (that’s 7.5’).  These are big birds.  And I was shooting with as long a lens as I can afford.  The only answer is to get closer.

Of course, not during the festival.  There are two ways to get closer to the birds.  They both involve getting on the water.  One is to go kayaking–Outdoor Chattanooga offers an annual kayaking tour in the refuge in December.  We did that last year.  It was pretty tough to get good pictures from the kayak.  Plus, we weren’t allowed in the area with the densest population of cranes.  Thankfully for the birds (but not my photos), the wildlife folks take protecting these birds seriously. 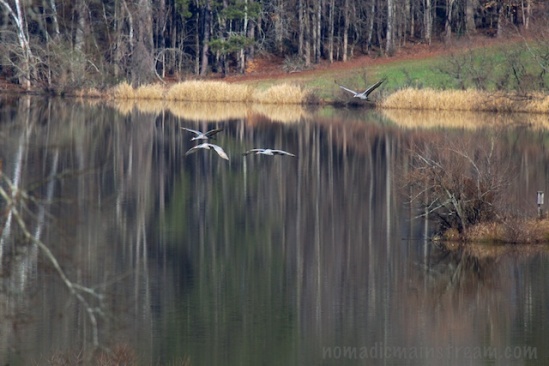 The other way is to take a Blue Moon cruise through the refuge.  This might be the best option for photographic opportunities.  We’ll have to see if we can work that into our schedule.  Worst case, there are soon going to be a couple of unreleasable cranes at the Chattanooga Nature Center.  I ought to be able to get a close-up. 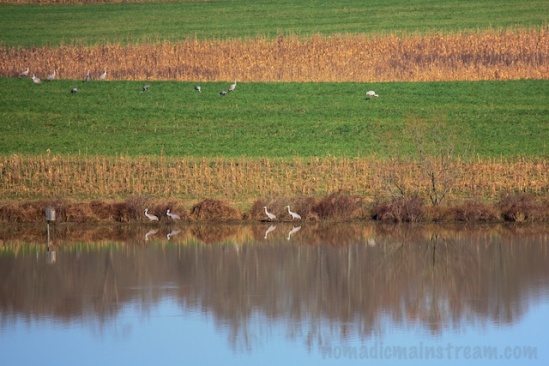 Tree tops reflected in water below group of cranes