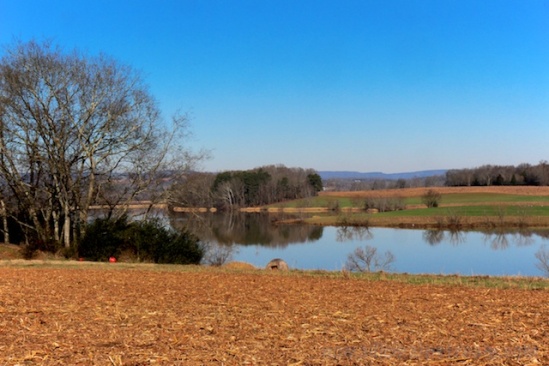 View of the refuge from the main viewing area

Because it’s a wildlife refuge, dogs are not welcome.  So, Tisen had to go to doggy daycare for a few hours.  This put a slight damper on the event for us, although I understand why dogs aren’t allowed.  We chose not to stay for the birds of prey show the Eagle Foundation was scheduled to provide, for example.

The cool thing about the festival was the TOS volunteers.  They set up scopes on the observation decks and called out sightings of interesting birds.  Were it not for the TOS volunteers, I would not have seen a Whooping Crane for the first time (although I’m hesitant to count it–it was so far away that even with my binoculars, it was just a flash of white amongst a flock of Sandhill Cranes) or a Golden Eagle.

A trio of cranes

The Golden Eagle was perched amongst some trees on a far away island.  I could only see it through a scope.  It had its back to us, so were it not for one very experienced TOS member who knew how to tell the two apart, I’m not sure any of us would have realized what we were witnessing.

We saw immature Bald Eagles, one adult Bald Eagle in the air and a second on a nest through a scope, Ring-neck ducks, and Canvas-back ducks all thanks to the skills of the volunteers.  I would have spent a lot of time figuring the ducks out and then not felt confident I had it right.  It’s just more exciting to bird with people who know what they’re doing. 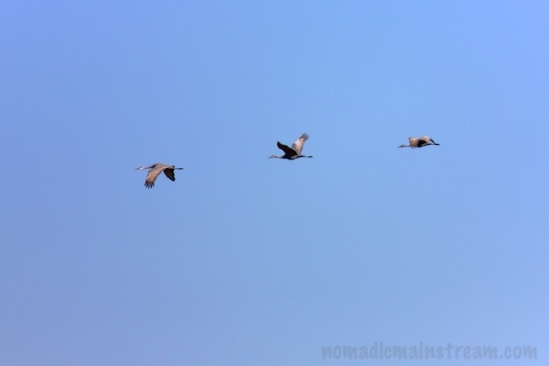 Same trio with wings down, up, and flat

The weather also made it exciting to be outside again.  Bright blue skies, tons of sunshine, and warming temperatures all made me smile ear-to-ear.

Although, during the festival you have to park at an elementary school in the nearby town (village might be more accurate) and take a bus to the viewing areas.

The recent rains created a slight delay in our return shuttle ride.  A couple of miles from where we were parked, a flatbed tow truck pulled out across the road, blocking traffic in both directions.  They stopped to pull a backhoe out of a muddy ditch where it was stuck.

This ended up taking about 20 minutes.  So, we got to sit on a school bus and watch while these guys used a winch from the truck and another guy pushed the backhoe with a front loader and together, they hauled the backhoe out of the mud and onto the truck.  When we got going again, we passed the giant mud puddle–it was a red, gooey mess that looked like a giant wound.  Hopefully the sun will “heal” it quickly.

Single crane over the lake