There are some moments in life that leave a lasting impression–a shadow of the experience that lives on long past the moment, perhaps even a lifetime.  One of those moments for me is the moment I crossed the “Danger!  Risk of Falling” line on the launch ramp on Lookout Mountain.  It was my first mountain launch as a novice hang glider. 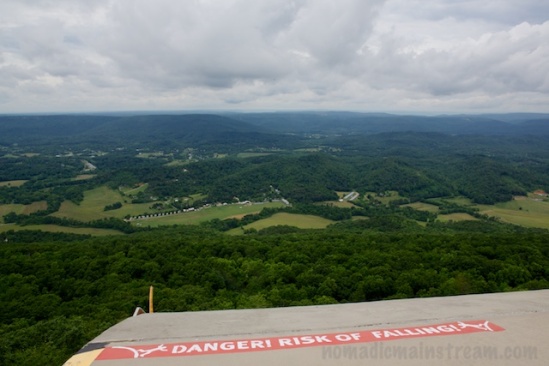 The Danger! line is literally a line on the launch ramp

We have returned to the Lookout Mountain launch a couple of times since that monumental day, but we haven’t been back to fly.  It’s been over a year now since I last hooked myself into a hang glider.  My husband has remained determined to return “eventually” to flying.

On Sunday, we found ourselves back up on top of Lookout Mountain at the hang gliding launch.  Soon, we were inside the office checking on our membership status and filling out paperwork to renew.  Then, we realized one of us was going to be out of town every weekend until July.  And so it appears we are likely to be celebrating our 18th anniversary on the training hills together.  At least, I will be on the training hills.  Pat may graduate to the mountain in a day (if hang gliding is like riding a bike), but I have no plans to go off the mountain ever again.

Of course, I had no plans to go off the mountain the first time either.  I just found myself there after getting to the point where I felt confident and comfortable enough on the training hills that it just seemed natural I would run off a mountain with a kite hooked to my body.

Standing there on the launch ramp, looking over the fall line, I found my knees remained solid.  I had only a brief wave of nausea thinking about stepping over that line, then, the shadow of the memory, the feeling of the hang glider on my shoulders kicked in.  The weight of it lifting in the wind assuring me I could, in fact fly.  All I had to do was look at the ridge on the other side of the valley and that’s where I would go. 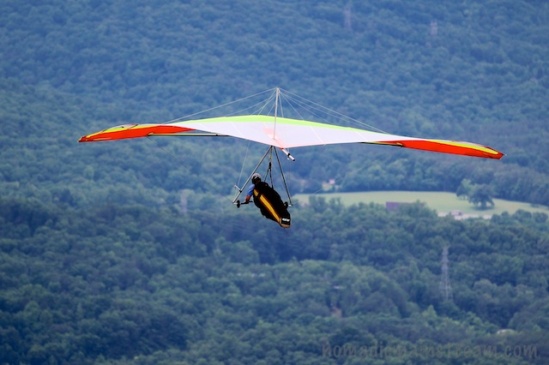 I switched cameras to catch the hang glider as it pulled away from the mountain.

Then, the memory faded and I looked down and another memory kicked in.  The memory of our first trip up to the hang gliding office–seeing the launch ramp for the first time.  The sudden terror that overtook both of us thinking we might be launching off that ramp.  The physical weakness, barely able to stand in the face of the fear of running off that mountain. 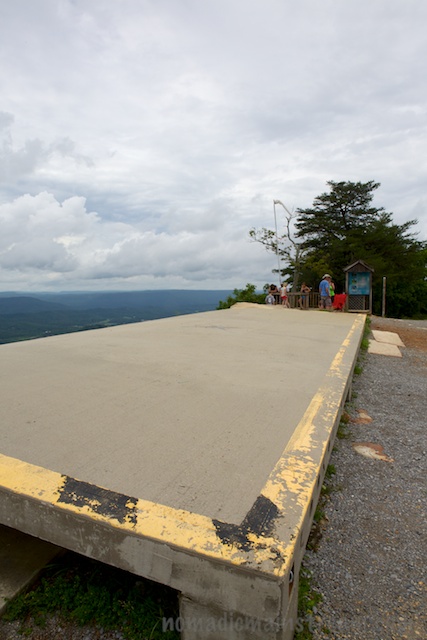 The contrast struck me as profound.  I am the same person.  My response to the same stimulus went from paralyzing terror to confidence (with a few vestigial belly butterflies).  Like so many things in life, the launch ramp is what it is.  We can respond to it however we choose.  As I look over the mountain one more time, I find myself wondering if perhaps, one day, I will launch from this ramp again after all.

One response to “Mountain Launch”