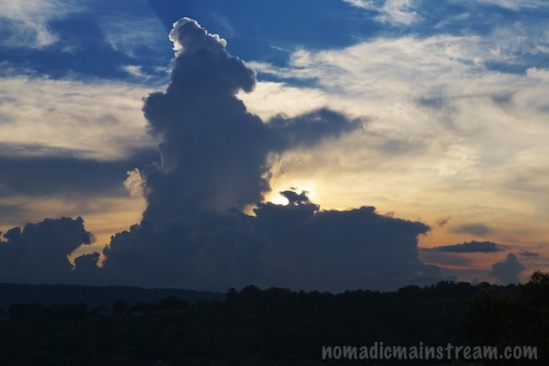 After shooting the moon from the Market Street Bridge the evening before the full moon,  I got to share the view from the common room in our building with a group of photographers from the local photographic society chapter.  A neighbor of mine and I organized a bit of a field trip.  Since the common room has a wonderful view of the river and of the anticipated location of the moonrise, it seemed like the perfect choice of destinations for photographers interested in capturing the full super moon rising over the Tennessee River.

The thing about the moon is that it’s not particularly cooperative.  It really can’t help it.  It just has a lot of dependencies.  It’s light is determined by the sun.  It’s visibility determined by the clouds.  It’s appearance above the horizon dependent on the objects between the moon and the viewer.  When you consider that there are nearly 239,000 miles between the earth and the moon, I suppose it’s a wonder that we are able to see it at all. 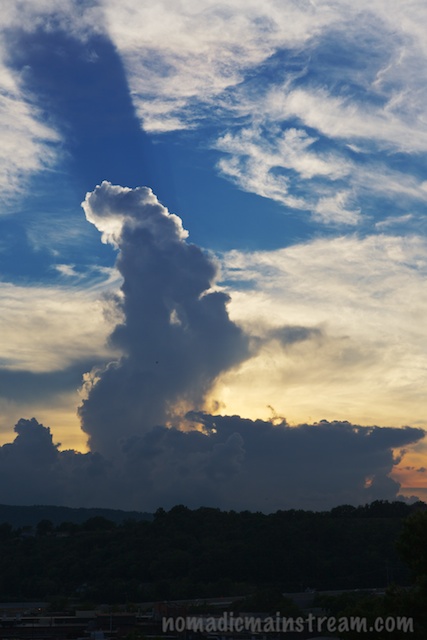 Back on the other side, the cloud stretches tall in front of the sun

But the first problem is figuring out when to expect it.  There are tons of places to find out the time of the moonrise, but none of them are ever right for exactly the place where you might be standing at that given time.  Not unless you happen to be in the same spot the time of moonrise was calculated from.

The second problem is figuring out when the sun will set.  The opportunity to capture the moon in full glory while the surroundings are still visible becomes increasingly difficult as the moonrise falls later and later relative to sunset.

On this particular night, the moon would not rise until a good half hour after sunset.  We, of course, scheduled our field trip to begin much earlier.  We probably should have taken the group on a tour of the riverfront while we waited for moonrise to approach.  However, we got to talking and snacking and decided to find a spot to shoot the sunset instead.  Finding a perch on an outdoor staircase with a view of the setting sun afforded some nice views of the clouds forming in front of the sun.

As the sun fades, the pink haze turns darker

The sunset is no more reliable than the moonrise from a photographic perspective.  The clouds were interesting, but didn’t quite result in the super-dramatic sunset one might hope for as a prelude to a rising super moon.  After shooting the sunset long enough to end up with many wasted images, we returned to the opposing view to watch for the moon.  The setting sun cast a warm glow across the Market Street Bridge and set some of the clouds aglow as well.

While it may not have been the most dramatic of sunsets, it still seemed photo-worthy.

A saucer-like cloud captured my attention