Osceola (or “Ocie”) seems fascinated by my camera

I have the opportunity to fill in for a friend of mine from Wings to Soar (formerly Save Our American Raptors) for a weekend.  I will be doing her part of the birds of prey show at Rock City–the Rock City Raptors.

In preparation for my debut as a raptor handler, Saturday morning I made my way (after a few wrong turns because I made the mistake of listening to my GPS instead of following the hundreds of signs that guide visitors from all over the world successfully) to Rock City for my first lesson on what to do back stage.  When you sit in the audience and take pictures, it all seems so simple.  Music plays.  A video plays.  Someone talks.  Birds appear.  Birds fly.  Everyone laughs and applauds and looks amazed.  Then we go home.

Back stage, things look a lot more complicated.  It never occurred to me that there was some pretty major choreography going on back stage to get that music and video happening and to keep the timing just right between the two presenters, Dale and John.

I took 5 pages of notes just on the transitions of media and movement of people and birds during the 45 minute show.  I didn’t even try to write down the things that John and Dale say about the birds during the show.  I’m counting on Dale to provide me a script for my parts for next weekend, when I get my second lesson.

Backstage, videos have to be queued up and started at the right time.  There are two machines to play videos and music and a mixer to manage the volumes.  There is a rhythm (I suspect–I haven’t found it yet) to popping discs in and out, starting them, stopping them, fading them out, etc.  In all, 16 discs are used during the 45 minute program.

I had trouble keeping up with all the disc changes, stops, and starts even when all I was doing was taking notes.

A family chats with John after the show, clearly fascinated by the birds

I, of course, didn’t have a chance to take pictures during the show.  It did, however, occur to me that perhaps I should try wearing a helmet video camera next week just to see what I get.  We’ll see if I can find the old Go Pro camera and get it charged and working again in time.  We’ll also see if John and Dale laugh at me so much that we find I can’t wear the helmet cam while working!

I did manage to get some shots after the show.  John and Dale always stay out with a Bald Eagle for people to get their photos next to and a Screech Owl that they can actually touch.  I grabbed a couple of quick shots during this time, but then there was just enough time to go to the restroom, pick up some lunch, and get ready for the next show. 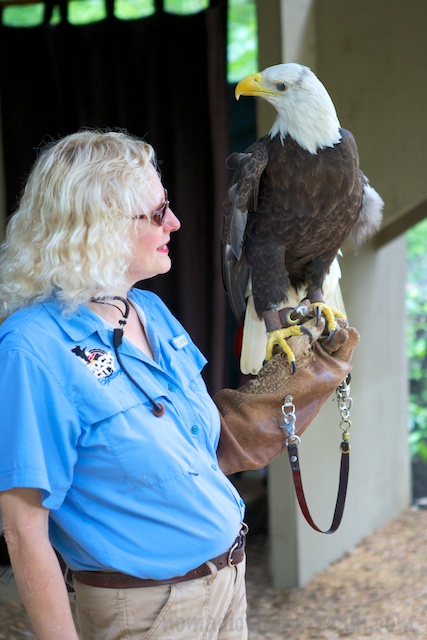 The 45 minutes of that first show were the fastest 45 minutes I’ve ever experienced.