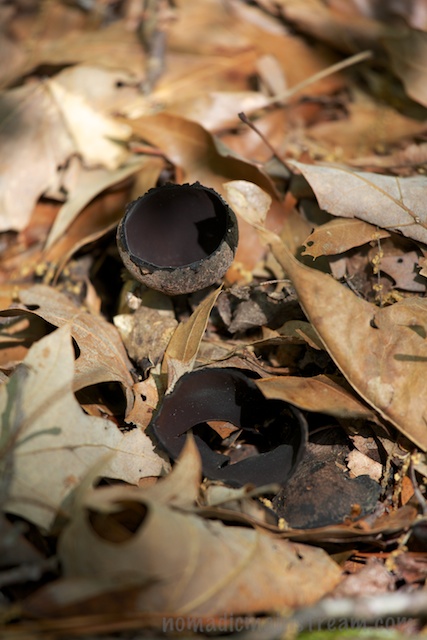 This is not a broken, black ping pong ball but rather a common fungus

There comes a time in every bird walk when someone much more knowledgable about plants than I am suddenly stops and points out a plant.  Often, the plant is a fungus.  Is a fungus actually a plant?  According to http://herbarium.usu.edu, it is not.  Rather, fungi have their very own kingdom–and what a special kingdom it is.

Photographically, I am always challenged when we encounter cool fungi or plants along the trail while birding.  This is because I only take one lens with me birding.  It’s my 100-400mm and it doesn’t really perform well for macro photography.  This doesn’t stop me, of course, from trying my best to get a shot of the life forms we encounter.  Realistically, I am not going to tote my tripod and macro lens on birding walks to capture these plants better up close, so I will just have to live with the motion blur and shallow depth of field I end up with when shooting with the 100-400mm.  It’s still better than what I get with an iPhone.

The first really interesting fungus we encountered looked like a block ping pong ball that hand been broken open.  In fact, it looked so manmade to me that I would have assumed it was litter had we not had one of our plant experts on the walk.  It amazes me when I see things like this in nature that we ever think we invented anything on our own. 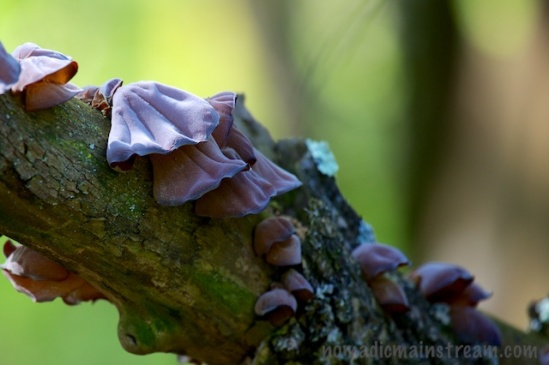 “My what big ears you have!”

The second interesting fungus was a group of wood ears growing along a fallen log.  They really do look like slightly slimy ears growing on wood.  I believe this may be the birthplace of the idea for Mr. Potato head.  Perhaps the wood ears were growing on a potato and someone thought, “Hey!  That looks like a face with ears!” and then the idea grew from there.  You never know.

What kind of buckeye is that?

The next interesting non-bird we saw was, in fact, a member of the plant kingdom.  It was of particular interest to me because my Tennessean friends called it a Buckeye tree.  As a person from the buckeye state, I can tell you that I have never seen a flower on any buckeye tree that looks anything like this one.  I have read on more than one occasion that the buckeye tree is indigenous to Ohio and not found anywhere else.  I had doubted the truth of that, but now am wondering if perhaps what people call a buckeye down in Tennessee is not really the same tree at all.  Whatever it is, it’s quite beautiful.

An immature red-tailed hawk sends us on our way

We made our way out of the wetland a bit tired after such an early morning start.  We found many birds in the 3 hours we spent wandering about.  As we stood listening to a Cerulean Warbler just before calling it a day, we were surprised by the appearance of a Red-tailed Hawk, soaring happily overhead.  I managed to get this image of the immature hawk flying over head.