One of my favorite shots of formations in the cave

Caves are dark.  Really dark.  In fact, the darkest places on earth.  They are one of the few places you can go where no light penetrates.  Of course, most cave tours don’t let you experience total darkness.  This would be a problem trying to make your way through the narrow, rocky path with slippery spots, tripping hazards, and so many places to hit your head that the guide has special names for the worst of them.

Sabre Tooth Tiger–definitely could have used a tripod

But, some cave tours do turn off the lights for a moment so you can experience what total darkness is really like.  The expression “can’t see your hand in front of your face” came from cavers.  It is absolutely true when you are in total darkness–you have to imagine  your hand is where you think it is because there is no visual confirmation. 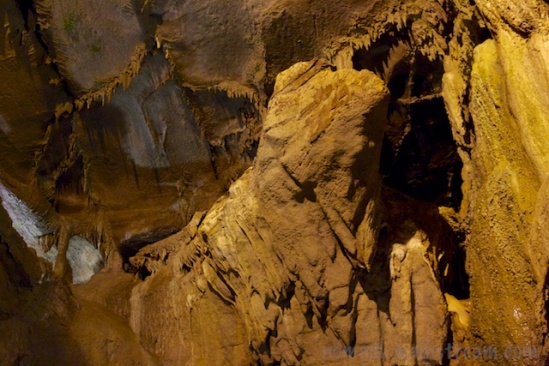 Obviously, just about anything that contains the root “photo” in it doesn’t work in total darkness–photosynthesis, a photodiode, photoreactions, and certainly not photography.

Mini-stalagtites growing from the ceiling

I decided against choice 4.  While I could have asked to see if bringing along a tripod would be a problem, I felt there was too much risk of damaging formations and/or tripping over them if I were trying to carry my big, bulky tripod through the cave.

I brought a flash unit, but decided against using it because, in part, of the un-predictability of flash bouncing off strange shapes and formations.  Plus, I only had one flash and it was going to have to be on my camera.  I was confident I would not get the kind of lighting I needed from that.

I did open up the aperture a bit (from f/22 to f/16) to get a slightly faster shutter speed even if meant slightly less depth of field.  I definitely cranked up the ISO setting.  However, I drew the line at 8000 ISO.  Higher ISO settings get too noisy for my tastes, especially when the scene is quite dark.

This meant shutter speeds as slow as ⅖ of a second.  That may sound like barely an instant, but it’s actually quite challenging to hold a camera perfectly still that long.  In the end, I was mostly pleased with the images I got, but all would have benefitted from a tripod.