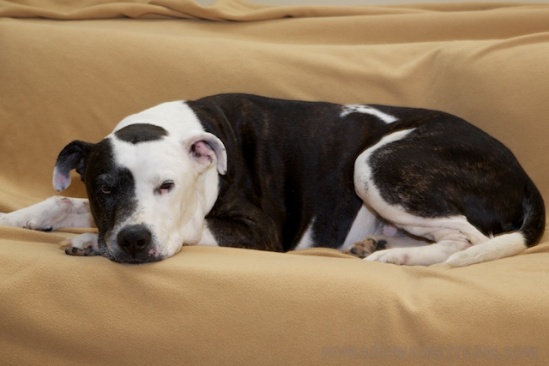 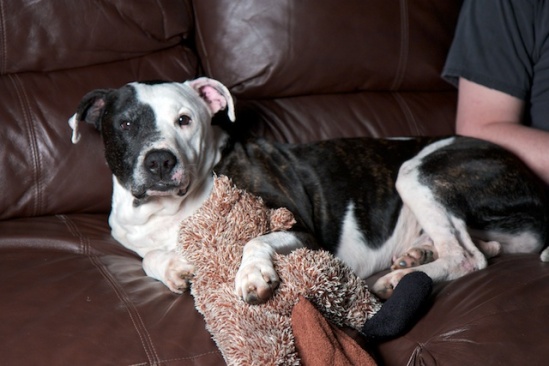 I’ve been doing well on holding steady with the photography equipment I have.  I had the small splurge on small accessories for my iPhone along with a few dollars worth of apps for my iPhone, but otherwise, I haven’t bought anything for quite a while.

Then, I got frustrated with my inexpensive manual flash unit when I last pulled it out.  First, it doesn’t have an auto-focus assist function for low-light focusing.  Second, I have to take about 3 shots to figure out the right power settings on the flash (or buy a light meter).  Third, it won’t do high-speed sync (meaning I end up with black bars on my photos if I have too fast a shutter speed and my only option is to choose a slower shutter speed even when that’s not what I want.  Finally, I can’t do rear-curtain sync.  This is a feature you don’t think about until you try to shoot motion in dim lighting.

So, having these irritations right about tax return time combined with the realization that the price of the Speedlite I’ve been lusting after has dropped significantly since I last fantasized about owning it led to one of those late-night purchases that made me feel a little queasy when I woke up in the morning and realized what I’d done.

While it’s not the most expensive piece of equipment I’ve ever purchased, I tend to think of things as being “expensive” or “inexpensive” based on how much use I get out of them.  My tripod had a higher price tag, for example, but I use it all the time and it will last the rest of my life.  I feel the same way about my lenses.  While camera bodies are expensive and quickly out-dated, they last years and the camera body is the one piece of equipment I use for every shot I take.  A flash, on the other hand, is an occasional add-on accessory for me, not something I need 80% of the time.

In any case, I decided I should start learning how to use the thing immediately in order to increase the odds that I will be happy with having purchased it.  I tried to get Tisen to help me work on using rear-curtain sync, but he was resistant and seemed to think I was mad at him because I kept coaxing him onto one side of the room, making him sit, and then, when he started walking, pointing a big, black machine at him that kept flashing.  When he started cowering when I called him, I decided I needed to enlist Pat’s help. 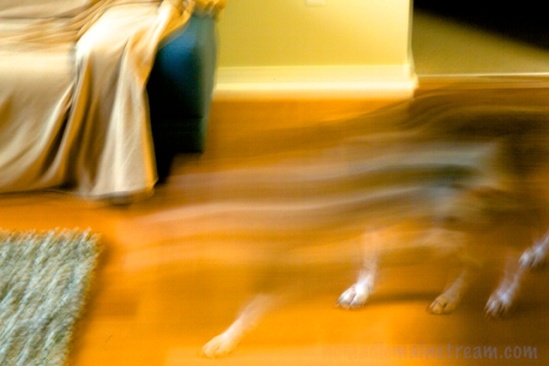 Pat was not more cooperative and I didn’t have any better luck getting the image I was looking for.  But, I was pleased with how nicely the automatic abilities of the flash unit to choose the exposure worked.  I got far better exposures with ¼ of the effort.  That’s encouraging. 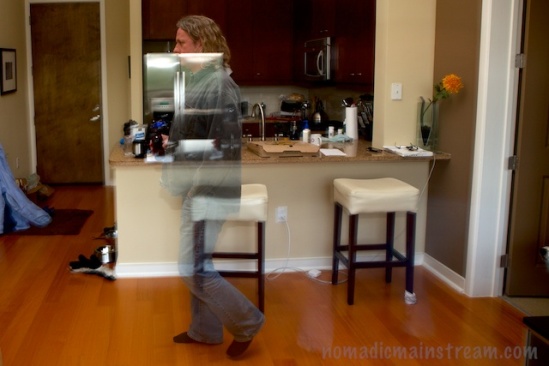 Pat got a little more solid, but he’s still see-through