Screeching to a mid-air halt, Cody prepares to land gently on the glove

While training Cody on Saturday, one of the things I realized was that I had lost my healthy respect for the fierceness of his talons.  I was holding Cody on my glove when it suddenly struck me, “Oh yeah!  He has incredibly strong grip strength and really sharp talons on those feet!”  It was as if I had completely forgotten that raptors can accidentally injure their handlers pretty easily if said handler isn’t paying attention.

Mid-air ascent–after riding the ground effect, Cody rises to the height of the glove

Fortunately for me, Cody and the other raptors I get to work with are accommodating and don’t intentionally try to harm people.  Perhaps even more fortunately, the realization struck me as Cody was working his way up my arm, but in time for me to adjust so he headed back out toward my hand and away from the end of my glove.  I can’t imagine what it would feel like to have one stray talon sink into the soft part of my arm–I’d like to keep it that way. 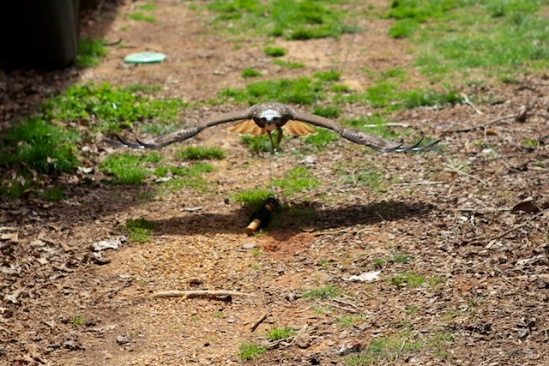 Having recalled the inherent danger in handling raptors, I stayed a bit more on my toes as we flew Cody.  Cody is about as sweet as it gets for a Red-tailed Hawk.  He ended up in captivity after being found starving.  He was taken to a falconer for rehabilitation.  The falconer attempted to teach him to hunt, but no matter what prey he encountered, he wasn’t interested in hunting.

Coming in for a landing–Cody touches down

Cody’s story reminds me of a story from my childhood about a bull named Ferdinand.  Ferdinand wanted to sit in the pasture enjoying butterflies and flowers rather than fight with bull fighters.  I don’t remember how the story ended exactly, but given that it was a favorite of mine, I would guess Ferdinand ended up happily wiling away the days in a pasture where he could be his gentle self.

This also parallels Cody’s story.  While Cody may not be interested in killing rodents, he’s happy to hang with the people who care for him.  He watches attentively as we work with him.  He seems curious–he clearly knows his usual training routine has been changed.  I suspect he remembers me, but I can’t offer any evidence that this is true.  He looks at me like he finds me interesting, but he doesn’t seem upset by my participation in the training process. 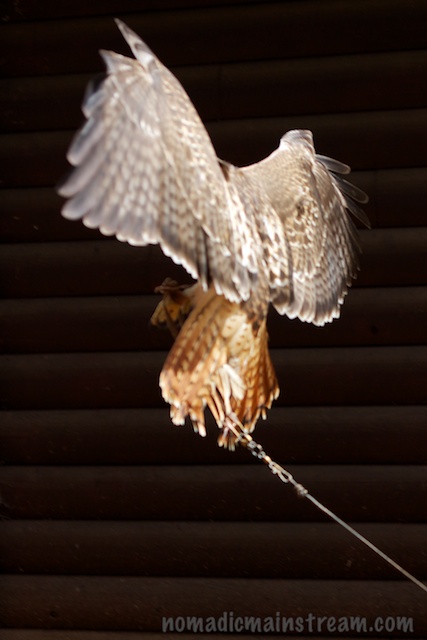 This is a back-view of Cody flaring to a stop

We fly Cody for a while and then Dale flies him without me so I can see if I can get some good shots of Cody in flight.  Cody is naturally photogenic.  Of all the birds, he’s the one I always end up with a bunch of great shots each time I shoot the birds.  However, he’s looking slightly less well groomed on this particular day.  He seems to have molted one of his tail feathers.  Almost like a missing tooth in the middle of a bright white, well cared for smile, the gap is hard to miss.

After the flare, Cody uses any remaining momentum to float gently to the glove

We try not to stare–no point in making Cody feel self-conscious.

This is Tisen’s idea of “flare”