Looking down a main street in Madrid

After indulging in delicious Spanish dishes (not to mention Sangria), we wandered around Madrid at a slow pace perfect for how I was feeling.  One of the questions I always ask myself is how do you describe the difference between a European city and a city in the US?

I’ve spent time in about a dozen major European cities over the years.  While each of them has their own characteristics that make them unique, they also have something in common that I find difficult to articulate.

Perhaps it’s a factor of age.  Or density of the architecture.  The buildings are literally on top of each other.  Entire city blocks have no gaps between buildings.  Yet, there are blocks just as crowded in NYC.  They still don’t look European.

Perhaps it’s the pavers they use for sidewalks and streets?  Sometimes more like cobblestones than pavers.  Rarely is the sidewalk simple concrete and the road plain asphalt.  In fact, I often find myself walking in the street thinking I’m on a sidewalk because they are sometimes indistinguishable.  The roads are often so narrow they seem like they must be for pedestrians only.

As I ponder exactly what it is that European cities have in common that make them distinguishable from US cities, we wander through a square.  Rows of market stalls full of goods cover the majority of the square–it’s the Sunday market.

Thankfully, my colleagues are not inclined to wander through the market for hours.  I have little patience for shopping; particularly when I’m jet lagged and in a foreign country.  Although, foreign markets are usually more interesting than the markets at home since you can learn something about a culture from what’s at the Sunday market.  I need to be well rested for an anthropology expedition to the market, however.  All I could think about at this point was how long could I stay awake.  My belly was full and the sun was shining.  Finding a spot to lay down was sounding appealing. 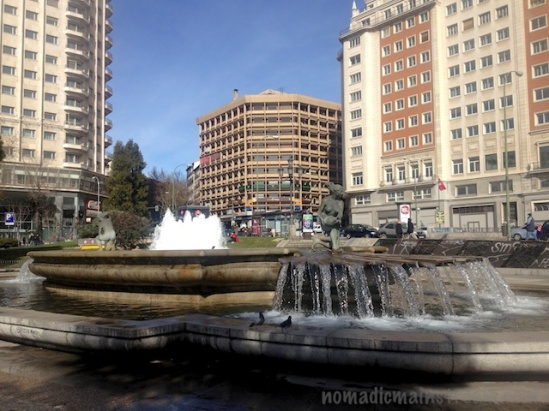 From the market, we found a fountain.  This is not hard to do.  There are many fountains in downtown Madrid.  It would probably be harder to not see a fountain than to see one.  As we made our way around the fountain, we looked up and saw a group of modern looking skyscrapers ahead of us.

Rome is particularly surprising in how tightly integrated the ancient and modern can be.  I suppose this is the natural outcome of having had a massive, ancient civilization and then having had the crap bombed out of it during the wars, leaving gaps that had to be filled. 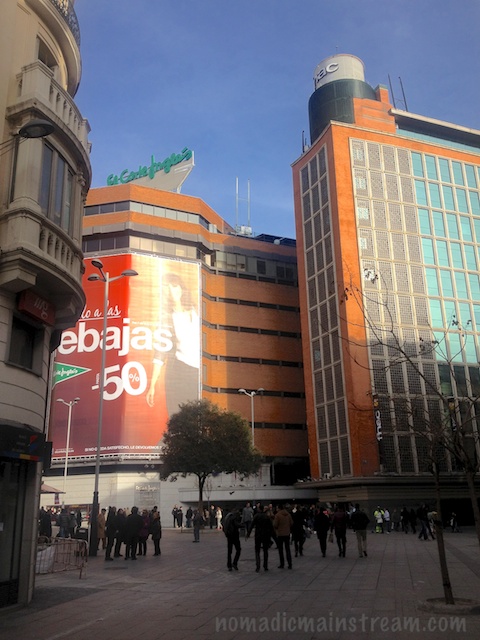