It almost looks like I succeeded, but the moving marble actually missed and passed behind the other marble

I failed to get two nickels to connect yesterday.  I decided to revise my experiment and try with two marbles instead.  Of course, if I ever owned any marbles, I lost them (yes, that’s a pun).  However, I do have a glass vase with a bunch of glass beads in it to hold the flowers in place.  These glass beads are reasonably round, so it seemed possible that I could park one and roll the other into it.

Disappearing marble–as the moving marble passes in front of the still marble, it’s so blurred, it’s a ghost

Picture this (another pun):  One large camera with a substantial looking lens on the front of it sitting on a big tripod and placed up close to the kitchen counter, level with the counter top.  One small, black glass bead sitting on said counter.  Me, kneeling behind the camera, reaching up to the counter and rolling a second small, black glass bead towards the first.  As soon as I release the rolling bead, I try to move my right hand back to the camera fast enough to hit the shutter at the moment the two beads connect.

This resulted in a lot of photos of the second bead rolling through the frame somewhere other than right when it hit the other bead.  In fact, it would have been impossible to capture the moment when the two beads hit because they never did.  I began to suspect the beads were imperfectly round.  I’m sure it had nothing to do with my coordination. 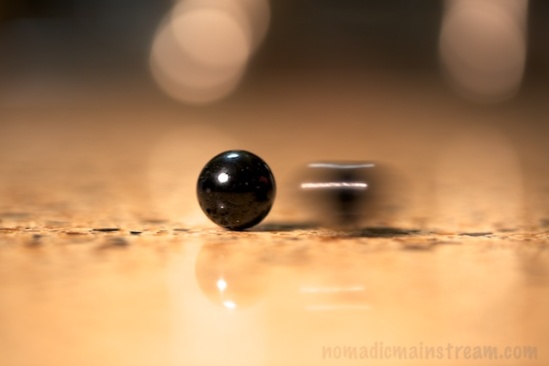 The most common image I ended up with

Since it rapidly became clear that I couldn’t hit the bead and I was not going to magically spout any extra hands, I recruited the extra pair of hands in the form of my husband.  It’s possible there are government grants available to study the length of time two adults can be amused by trying to collide two beads and get a picture of it.  I should have applied before starting this exercise–I doubt I will get a second chance to run the experiment. 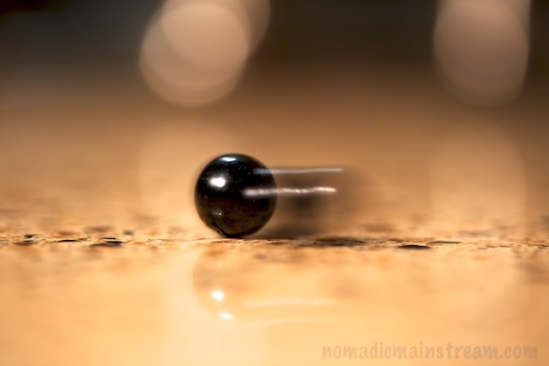 The two marbles actually collided in this shot, but I was a split second too late and the sitting marble blurred as it started to move

The one thing we did prove is if the lack of ability to make the two beads connect is related to coordination, my husband is only slightly more coordinated that I am.  Since he usually has pretty good finesse when it comes to doing anything involving eye-hand coordination, I’m confident those beads really weren’t all that round. 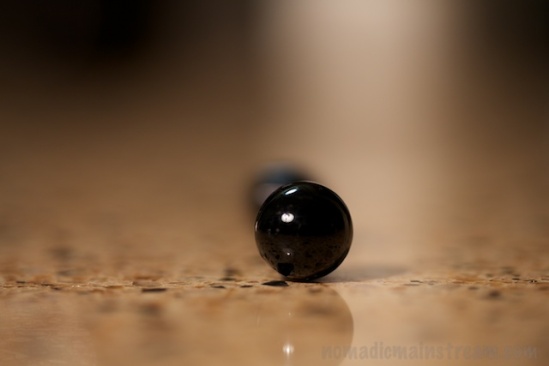 One marble passing behind the other

On the rare occasions when he managed to get the two beads to connect, I missed the shot.  I have about 40 images of one bead rolling into the frame on the right while the second sits patiently.

Marble passing in front of the other

It’s more fun to create 40 of these images than it is to look at them one after another.  But, as I flip through the shots, a running narrative goes through my head “almost, almost, there it . . . oops . . . here it comes again, almost, oh shoot.”  The one shot where it looks like I captured the moment the two beads were colliding, the rolling bead actually passed behind the still bead without touching it.  But, I’ll take it.

The marble came hoping into the frame in this shot