I was reflecting today on what first excited me about photography.  I always appreciated others’ work, but the expense of film and printing photos just to discover if they were crap seemed like overwhelming deterrents to me when I was young.

There were two things that gave me the push to get started.  First, there was the advent of digital photography, providing immediate feedback and reducing the cost of learning.

The second was a work friend, Rick, who was (and is) a wonderful photographer.  He advised me on the camera purchase that started my endeavor to learn the fundamentals.  It was not a DSLR, however.  That would have been a waste of money for me back in early 2003 given that I had never heard the words “aperture,” “shutter speed,” or “depth of field.”

This photo was the first picture I took that made me think photography might be the most exciting hobby on the planet.  Who knew you could make it look like the wall was on fire with a camera?

While I won’t be putting this in my portfolio, I love it all the same.  The reason I love it so much is because it evokes the utter glee I felt in discovering that creating such an image was possible.  It was like handing a child their first box of crayons and a blank piece of paper.  I didn’t know enough to be self-critical; I was just having fun.

That camera with that attitude got me through my first five years of sporadic shooting.  It wasn’t until 2008 that I upgraded to a DSLR.  This was because I wasn’t shooting frequently enough to improve beyond my camera’s capabilities until 2007.  That year, I shot frequently enough to be frustrated repeatedly by the limitations of a point-and-shoot.  I knew exactly why I needed a DSLR when I bought one.

As I contemplate my next camera body, I pull out some of my photos from the old PowerShot G3.  Have I improved as a photographer since upgrading to a DSLR?

My photos with my latest gear are sharper, cleaner, and quieter.  But, I am reminded of when I was doing triathlons and I was choosing between Shimano Ultegra vs 105 components for my new road bike–would the extra $400 to shave a fraction of a second off how long it takes to shift make as much difference as, say, training more?

This helps me get clear in my own head on when to invest in gear.  In the end, I really don’t need to buy anything if I am not being frustrated by the current limitations of what I have.

Note on today’s dog picture:  Tisen is taking a break from modeling today due to having had too much fun at doggy daycare to pose for mommy in any position other than “sleeping on the couch,” which I think we’ve seen enough of for now.  So, here is another one of my favorites from my PowerShot G3 instead–this is Katie, who died along with a piece of my heart in April 2007: 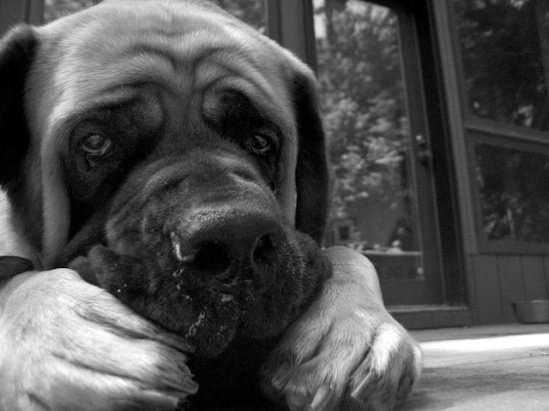