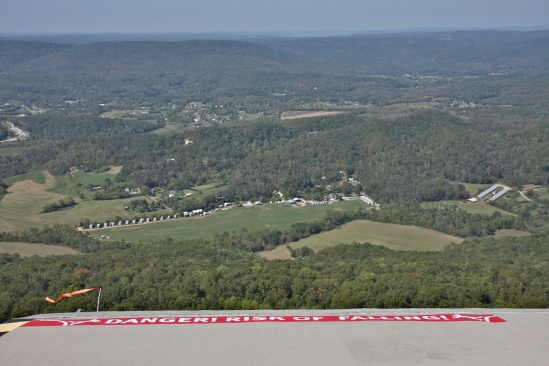 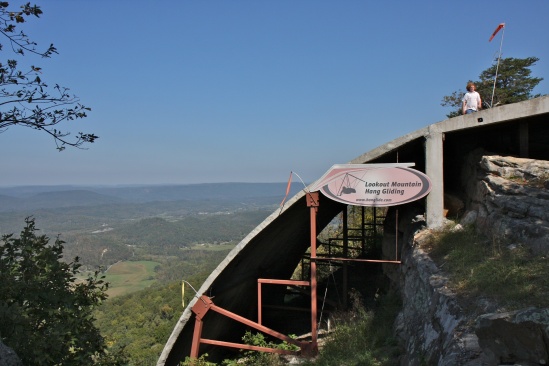 Saturday afternoon, we returned to the mountain launch  at the Lookout Mountain Flight Park.  We called first and learned there was about a 50-50 chance that the wind would quiet down as the sun got lower.

We stood at the top of the launch for the second time that day.  I stood on the steeply sloping concrete ramp and imagined the steps I would take to launch.  I even took the first few steps, pretending I was holding a glider on my shoulders.  I managed to get almost up to the “fall line” without getting gelatin knees.  Normally, being close to the edge of a precipice makes me feel faint.  Today, with my eyes on the horizon and the imaginary glider on my shoulders, I barely notice how close I am to the edge.

I hear my husband in the background, “Careful–don’t forget you don’t have a glider!” He knows exactly what is going through my mind, having stood here himself more than once.

The windsock doesn’t turn my way.  It continues to blow “over-the-back,” as they say.  In other words, a tailwind.  Launching in a tailwind is not an option.   We hang out on top of the mountain for an hour, walking Tisen in the woods and watching the sun get lower in the sky.  But, the wind only gets stronger.

We return home.   I’ve been cleared to launch from the mountain 3 times now, but this is the first time I’m disappointed the weather kept me grounded.

The next morning, we get up early and head on over to the mountain again.  Now that I’m ready to launch, I want to launch.

On the way, I do a calculation.  I have done approximately 150 training hill flights of 7-12 seconds each, or about 1500 seconds of total flight time.  So, in exchange for 150 landings (the part that’s hard on my body), I have gotten 25 minutes in the air.  By comparison, I should get at least 5 minutes in the air in a fledgling flight off the mountain launch.  That means I only have to land 5 times to get the same amount of air time I’ve had to land 150 times for in the past.  My knees are also excited about the mountain launch now!

But, alas.  The wind is no more cooperative Sunday morning.  I stand poised once again on the ramp, visualizing my flight plan.  We even go so far as to assemble a glider and have it ready to go just in case the wind turns around.  But, by the time of the morning where the valley is in the sun (an event that can make the wind change direction), the wind is still blowing the wrong way and far too strong.  Even the tandem flights that are towed up are grounded.

We return home disappointed for the third time in a row.  But I retain the feeling of excitement anticipating that first launch.

Tisen wags his tail listlessly on the drive home as he cuddles Minnie Teddy. 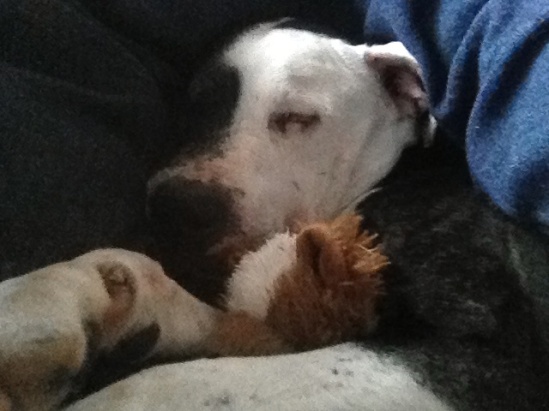