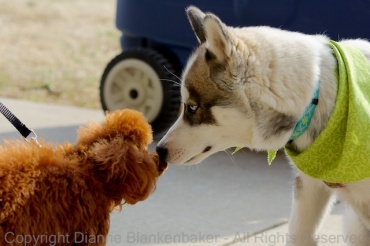 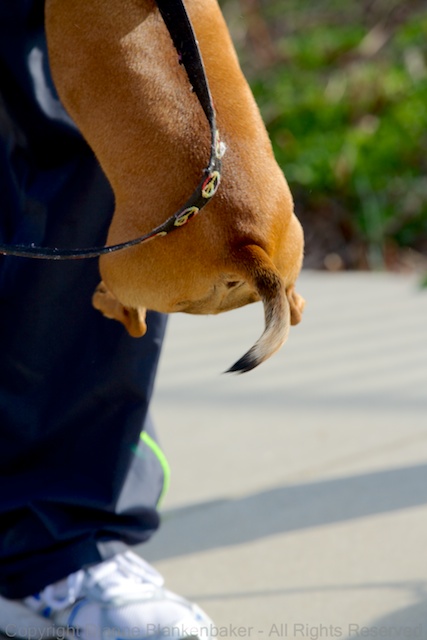 When Tisen and I walk the park, we pass an area planted with grasses that are apparently native to Tennessee.  I don’t know if they grow in Ohio–I don’t recognize them.

They grow in tall bunches and produce lovely seed heads that look decorative from late summer all the way through winter.  In the spring, the park landscape crew clears out the dead grass and they grow fresh green sprouts and start all over again.

Tisen is fond of these grasses.  They have the obvious attraction of providing a place to leave his scent that’s fairly high off the ground.  This, however, creates a problem related to the second reason Tisen is fond of these grasses:  he likes to scratch himself by throwing his body against them and/or swaying his rear end back and forth under their curving stems in a weird sort of move that makes one wonder exactly what his intentions are.

Now, the problem is in that he’s rubbing himself against the very same grasses he has previously . . . uh . . . watered.  Fortunately, he has the wisdom not to water and rub in the same place.  He wants to leave his scent behind, not carry it off on himself.  However, as I mentioned, we walk the park 3 times a day.  He doesn’t really keep track of where he “watered” on the previous walk.  As such, we sometimes return from walks with a slightly smelly dog, but at least not a wet one.

In any case, a handful of seed heads from these grasses had fallen onto the sidewalk.  Since those still attached to the grass were blowing around a rates of speed that just weren’t going to work for a macro shot, I set up my tripod and camera so the lens was pointed down and directly over the seed heads on the sidewalk.  No sooner than I got completely set up, my four-legged photographer’s assistant decided to stand on my subject.

So, for this particular shot, I arranged the seed heads.  I picked up one strip of seed heads along with a dark brown dead leaf and laid them down on the sidewalk where Tisen wouldn’t step on them.

They look better against the dark brown leaf than they would have on the gray sidewalk, so I guess Tisen really was assisting.  At least he didn’t eat them.

Tisen is actually a very good assistant.  Most of the time.  He patiently waits while I shoot.  He usually doesn’t walk on the subject unless it’s for a good reason.  And, he makes me feel perfectly safe walking around a park late on a winter afternoon carrying my equipment.

To tell the truth, I’ve always thought my gear would make a pretty good weapon in a worst case scenario, but I feel like I won’t have to risk damaging my camera with Tisen around.  Although, I’m not sure how seriously people take him as a protector when he’s carrying his yellow duck in his mouth. 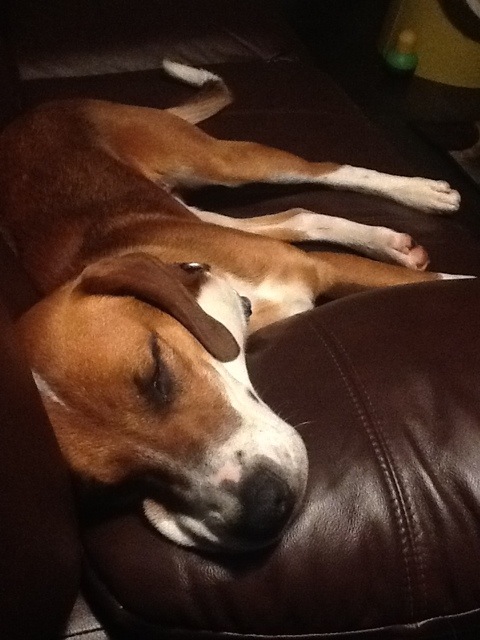 Every time we take in a stray animal, we enter into the search for owners hopeful that we’ll find a happy place for the cat or dog quickly. There are reasons for this.

First, let’s face it, animals that have been abandoned have often been abandoned because they lived with people who didn’t know how to train them and they’ve developed bad habits. While I enjoy training dogs (I don’t even try with cats), habits that disrupt my sleep wear on me quickly.

Second, there is an attachment factor. The more time I spend figuring out the particular quirks of a particular dog and how to work with them successfully, the more I get to know them, the better they start to behave, the more I feel like we’re working together as a team, the more attached I get. I’ve found there is an interesting pattern in the relationship that goes something like this: 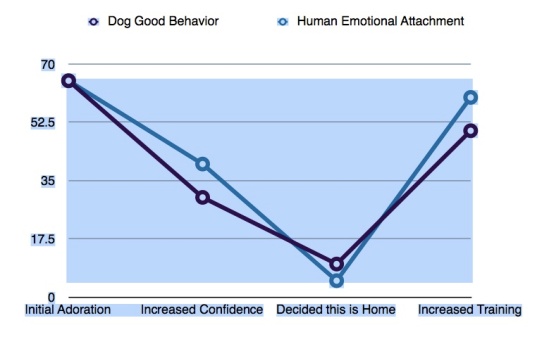 I’m not sure what canine instinct makes a stray dog behave like the best dog ever at first. It’s as if they know to be cute enough to rope you into keeping them.

The dogs themselves seem to start out feeling complete adoration towards us plus nervousness about being in a new situation. Then, as they lose their nervousness and increase their confidence, they also let their guard down much the way a human might be the most polite person to a perfect stranger and then turn around and snap at a cherished family member.

By the time the dog really feels at home, I feel the frustration that led to their abandonment. When all the bad habits surface, I know it’s time to crank up the training.

With Rex, we had run into a few bad habits–he ate both our power supplies for our laptops, so if I don’t post tomorrow, my battery died. 🙂 But really, he was just completely lacking in training.

Sitting on the bench at the adoption center while Rex’s new parents filled out paperwork, he came and laid his head in my lap. I petted him and talked to him quietly. Then, his new dad came over and sat down on a nearby bench and Rex walked over to him and laid his head in his lap. His new dad leaned down with his face close to Rex’s, stroking his ears and looking at him with the kind of wonder parents show newborns. It was obvious that this man was in love with Rex.

This man struck me as the embodiment of calm. His wife was sweet, too, although I suspect she’s a little higher strung, like me. But the bonding that was taking place right in front of me between Rex and his new dad was what gave me confidence that Rex was going to a good home.

But you know what? I’m still sad.