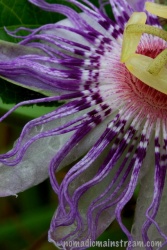 Pat joined Tisen and I for a quick stroll around the park the other day.  As we made our way down the path, we spot a strange, tiny alien vessel parked along the sidewalk.  We paused.  We stared.  We tried to decide if we were in any danger.

Eventually, we decided it was, in fact, a flower.  Neither of us could recall having ever seen such a flower before–yet, there certainly wasn’t any evidence of this being a recent addition.

Since I only had a 15 minute break, we double-timed it around the park and I made it to my next conference call.  But the strange, alien-looking flower stuck in my mind.  I watched out the window as the clouds gathered into a charcoal grey mass and suddenly let loose with a series of lightening strikes that were close enough to make all the body hair I didn’t know I had stand on end.  I looked over at Tisen who, even more tired than I am, slept through the first few rumbles of thunder.

I went back to concentrating on work, glad Tisen wasn’t disturbed by the storm.  When I next noticed my surroundings, I moved my foot and discovered Tisen was tightly curled around it on the floor.  I’m not sure how long he was there before I noticed, but he was snoring again, his breath warming my ankle.

The thunder and lightening subsided after some of the craziest strikes I’ve ever seen.  I wished I’d had a chance to set up my camera and shoot a couple of really cool lightening bolts.  But, Tisen was definitely glad I was safe inside and out of harm’s way.  Or, perhaps that he had my feet to keep him safe.

By the time I decided I had to stop working, the sky was lightening as if the sun had decided to reverse direction.  The cloud cover turned brighter gray, the lightening and thunder stopped, and the torrential downpour let up completely.  I decided to not only get out my camera and put the macro lens on, but I also used my extension tubes for really close-up shooting.  I convinced Pat to join me and Tisen so I wouldn’t have to hold the dog while I was shooting.  I even grabbed my tripod, a mini-light reflector, and a plastic garbage bag I stuffed in my back pocket.  I felt like a real photographer.

Then, I went after those aliens.  They were drenched and a bit beaten by the weather, but the occasional rain drop still clung to their innards and petals.

Eventually, I googled until I found out this is the state flower of Tennessee, the Passionflower.  While that seems like the most perfect name for this flower to me, supposedly it’s also called a Maypop.  I didn’t see any in May, but maybe they were late bloomers this year?

2 responses to “A Little Passion”