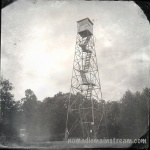 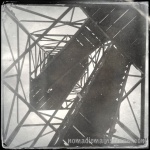 Inside the Prentice Cooper Wildlife Management Area, along side the gravel road that leads to Snoopers Rock, there is a Ranger Station.  Like many ranger stations, it looks like someone’s home.  Unlike any other ranger station I’ve seen, in the grass-covered yard outside the house sits a tower.

The tower stretches impossibly high for it’s width.  Just looking up at the top from the ground makes me dizzy with the probability that it will topple over in a strong wind.  I am not the only one who thinks so–the national forestry service, or some such official organization, saw fit to tie the tower off to a post on one side, presumably to prevent such toppling.  It’s left to the viewer’s imagination as to why the wind blows from only one direction at least in the minds of the people who added this safety precaution.

There is a sign at the bottom of the tower.  It tells visitors that they may climb to the top of the tower at their own risk.  The first time we stopped to see this tower, I thought I might be brave enough to scale the steep and narrow wooden steps that lead some 70 feet straight into the air.  I was wrong.

Like a giant mouse trap baited with the promise of a spectacular view, the tower felt poised to spring the moment I set foot on the first step. The steps creaked and groaned their surprise at being asked to bear my weight. There was nothing about their rotted appearance that promised they would be strong enough.

I crept up one flight, and then two.  As I got higher, the structure seemed to sway more.  When the wind picked up momentarily, I felt like I was high on a tree branch swaying on a branch.  I have more faith in a tree supporting me than the tower.  By the time I made it up the third flight of steps, I was paralyzed with fear.  The vision of the entire tower imploding with me deep in its belly was too much for me.  I turned and made the even more frightening descent, learning how truly steep the steps are as I reached one foot downward in space, finding the faith that another step would be there as I shifted my weight past the point of no return and gratefully landed on solid wood.

This trip.  I did not attempt to climb more than half of the first flight of steps.  I went up just far enough to sit down on the steps, my back to them, and lay back so I could take some shots of the belly of the beast.  Even then, I could feel the entire tower swaying in the wind.