I am not an expert in flowers.  I know the occasional flower, but am often stumped by what a particular flower might be called.  I envy people who can pull out that information on a dime.  I can do that with a lot of birds, but in spite of how immobile plants are, they seem to fly right out of my brain.

But these flowers didn’t just stump me, I couldn’t remember having ever seen one before.  Perhaps I walked by too quickly and didn’t notice that it wasn’t just another Queen Anne’s lace.  But as I looked at these images more and more, I couldn’t come up with any memory of one.

Besides being surprised by the new flower in my life, I was also surprised when I went a little nuts playing with adjustments and pulled the curves feature in a direction that created much of the effect in this image.

This is a “normally” post-processed version of the same image: 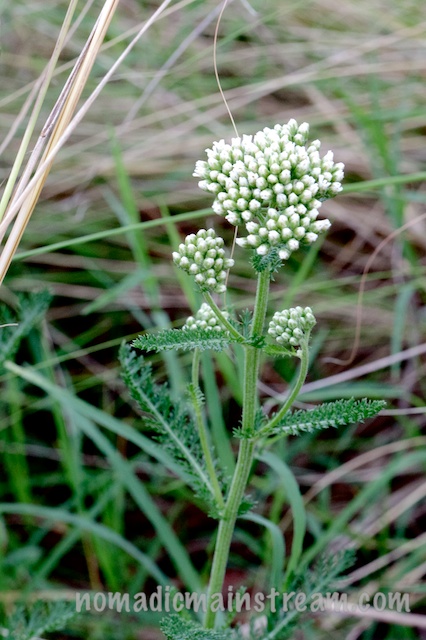 As you can see, I was playing again.

Perhaps the biggest surprise today was when I was working away at my desk and a man hanging from a rock climbing rope appeared outside my 7th floor window.  I’d forgotten that the building’s windows were being cleaned until I was in the middle of a conference call and suddenly joined by this mysterious window ninja (that’s the name of the window cleaning company).

Had I not been in the middle of a conference call, I might have had the where-with-all to snap a quick shot of this guy hanging outside my window with my iPhone.  It didn’t occur to me to do anything but pretend the guy wasn’t there (once I got over my initial shock).

Tisen’s girlfriend is visiting for a few days.  She noticed the window ninja about 2 minutes after he appeared.  She immediately jumped up and started barking.  I’m confident Tisen would never have noticed him had it not been for this alarm–he’s so oblivious it’s almost funny.  However, he joined in the barking and I had a difficult time explaining to the folks on my call that I had a man hanging outside my window.  Fortunately, it was an informal and internal call with colleagues I know well.

It wasn’t the most exciting day, but there were quite a few surprises.