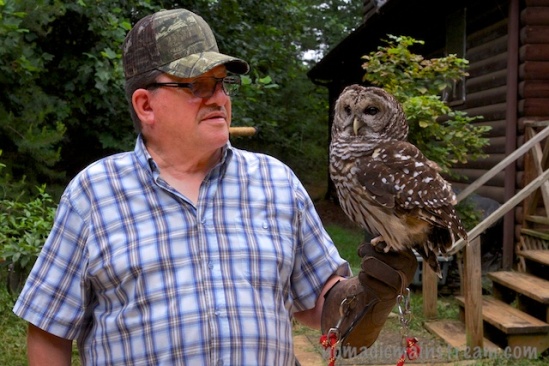 Note:  my husband is once again the guest photographer for all photos of the Raptor Experience, including in yesterday’s post.

One of the great pleasures in life is sharing something you love with someone who enjoys the experience.  Think about it.  While on the one hand, we might respect that everyone has different tastes, there is something in human nature that causes us to gravitate towards people who appreciate the same things we appreciate.  And introducing someone to something that’s a personal favorite makes for a particularly enjoyable experience.  It’s like discovering a new food that makes you want to groan when you put it in your mouth and finding out that someone else has the exact same reaction–it’s something in common, creating a tiny bond. 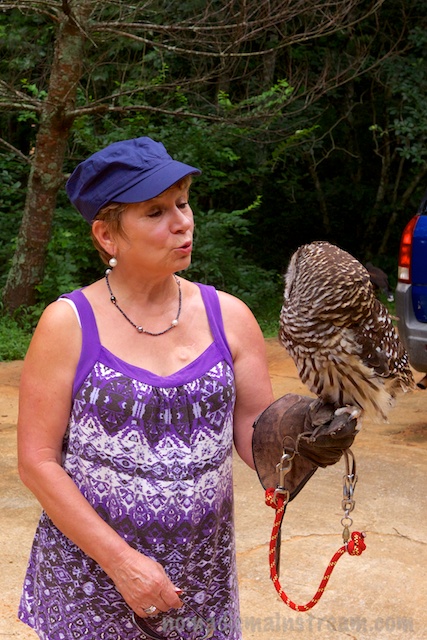 I think that’s why I enjoy volunteering for Wings to Soar so much.  There aren’t many people who don’t enjoy getting up close to birds of prey.  There are a few.  I recently met someone who is terrified of birds–probably not a great idea to introduce her to the raptors.  But most people are pretty fascinated by getting to see a creature up close that they normally only get to see soaring overhead or perched high above. 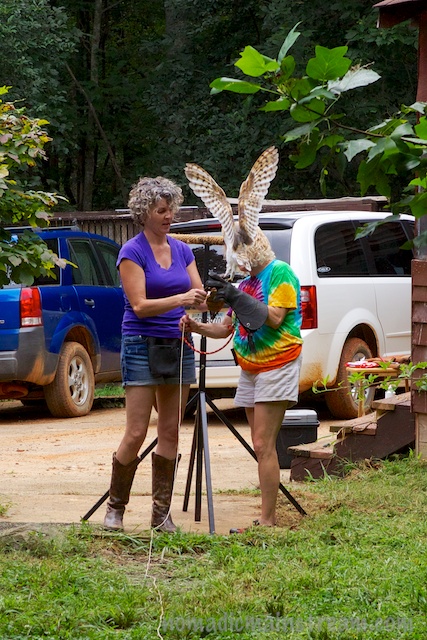 Me assisting in the background in my Cayce-protecting boots

It’s interesting how this interest crosses cultures and language.  I may not be bilingual, but I’m pretty sure the owls are.  They seem to recognize their admirers in any language.

Artie, the Barred Owl, hopped on Horst and Elvi’s gloves and immediately settled down and looked content.  he wasn’t the least concerned about what language they spoke–as far as he was concerned, they spoke owl.

Theo hopping over to Horst’s glove

Theo, the Barn Owl, however, might have been a little too settled–he was content to ride over to Elvi and Horst when we were hoping he would fly.  He sat on the perch and stared, occasionally acting like he was going to fly, but then waited patiently for Dale to come over and put him on her glove.  Dale walked Theo closer to Elvi and Horst in turn, trying to get Theo to a distance from which he would fly.  Theo looked longingly at the tasty piece of mouse on the destination glove, but he wouldn’t fly to it.  When Dale put her glove next to Horst or Elvi’s glove, he happily hopped over to their glove and munched contentedly.  He seemed perfectly happy; he just didn’t feel like flying.

Theo is a human imprint–he was raised by humans and doesn’t really understand he’s an owl.  I sometimes wonder if his reluctance to fly is because he identifies so much with humans, he starts to think it’s unnecessary.  But, then there are days when Theo doesn’t seem to want to sit on a glove at all.  He baits and baits and can’t seem to stay still.  I don’t know if it was the calming influence of Horst and Elvi, but I think he would have sat all day. 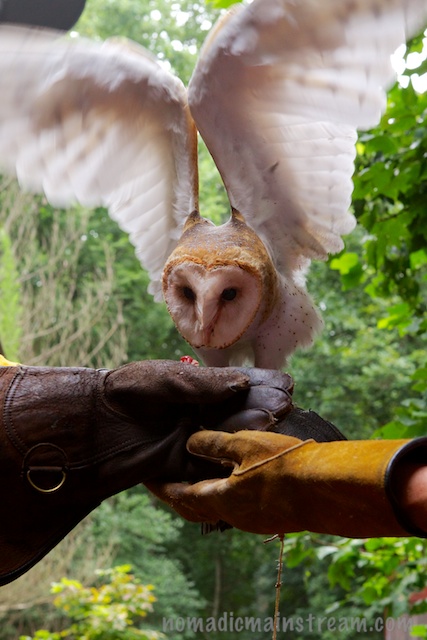