Today’s photos are by my husband, Patrick Murray, shooting with the Canon Rebel T4i.

As mentioned in an earlier post, I’ve been in training on Saturday mornings.  I am learning how to be the assistant in the Rock City Raptor’s program so I can cover for a vacation.

The problem, of course, is that I cannot both perform in the program and take photos.  I was quite happy that my husband made some time to come up and watch a program and take some pictures. 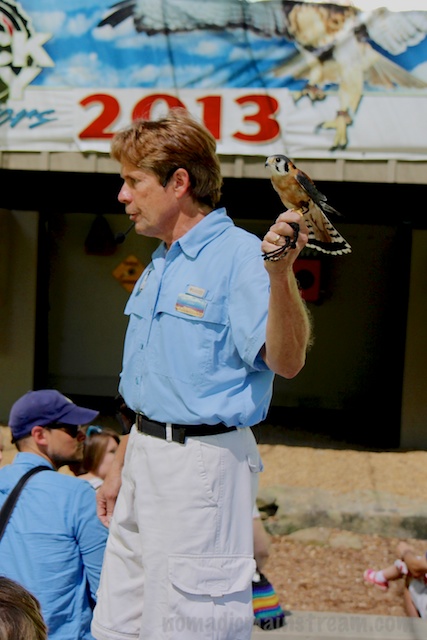 John with Gilbert, the American Kestrel

It’s amazing how quickly things get confusing back stage–a DVD player failed a couple weeks ago and was replaced by a smaller one.  There are 2 DVD players and the one that failed was on the bottom.  The new, smaller one is now on top.  All of my notes refer to top and bottom.  This means having to do a mental flip-flop when I try to remember which machine I need to do something with.  It’s irritating how this small change can put my brain into what computer geeks call “thrashing.”

But, after many Saturdays, some things are starting to come together.  I am now, for example, able to walk around with both Buddy and Jerry on my glove and get through the Screech Owl script without forgetting much of it.  I’ve now managed to walk through the audience, stepping over people sitting on the steps, and stepping up on what can be slippery rocks without hurting myself.

John with Artie, the Barred Owl

Although, I did fall before the show because I was carrying Cody (the red-tailed hawk) next to a wall and was following instructions to keep my body between Cody and any objects that he might hit should he decide to bait (fly up from the glove), which he does frequently.  In my determination to protect Cody, I forgot that I was about to go up stairs and fell up the stairs.  Cody, ironically, stayed calmly on my glove through the whole thing.

I have a few days worth of Pat’s photos (I did quite a bit of post-processing), so here are just a few from the first few birds in the program.  The last image is a post-show image.  At the end of the program, I take Buddy (one of the screech owls) out and let people touch him.

This is probably my favorite part.  Since I don’t have to walk through the crowd, make sure the microphone is picking up my voice, or worry about saying the right things at the right time (so I cue someone else to do their part), I can really enjoy the looks on people’s faces when they touch an owl for the first time.

I also get to hear their stories and answer their questions in a more one-on-one kind of basis.  What’s really cool is hearing people comment about how much they enjoyed the program and, especially, the new things they learned.