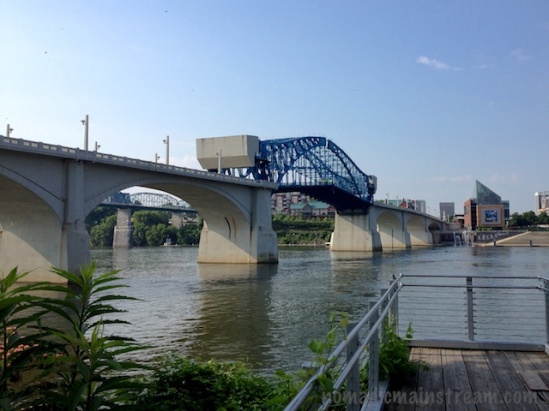 Not nearly as exciting as when the bridge was fully open

About a week or so ago, I was out walking both Tisen and Twiggy when I missed a once-a-year shot.  Walking Tisen and Twiggy together gets a little tricky at times.  Twiggy likes to lead.  Not just Tisen, but me, too.  She likes to decide where we’re going and when we’re going there.  When we disagree with where she wants to go, her claws extend much like a cat’s, except that she possesses some superpower that allows her to drive them into concrete.  She then leans with her body at what is often a 45 degree angle against her harness and demands that everyone goes the direction she wants to go.

Tisen is somewhat oblivious to her demands.  If he catches a scent in the opposite direction, he goes towards it without regard for me, Twiggy, or the fact that he’s got a collar pulling against his neck.  I sometimes worry that he would strangle himself before he would realize he was the one causing it.

The gap is no longer even visible

When Twiggy goes one way and Tisen goes another, the human who happens to be in the middle ends up doing what could be called the “Scarecrow,” but with very straight arms.  On days when both dogs are particularly adamant about the direction they want to go, it’s more like being on a medieval rack.

I have been working with the dogs to try to prevent this problem.  I’ve gotten Tisen to return to me when I make a certain sound and Twiggy to understand that we’re going to turn when I want to turn unless there’s something particularly tempting in the direction she’s determined to go.

But on this particular morning, as we made our way through the park, I suddenly got a view of the Market Street bridge and realized it was fully open.  It’s a rare type of draw bridge that’s opened and closed by a counter-weight system.  I don’t recall what it’s called, but it’s pretty cool.  It’s opened about once a year for inspection, but this was the first time I’d ever seen it fully open. 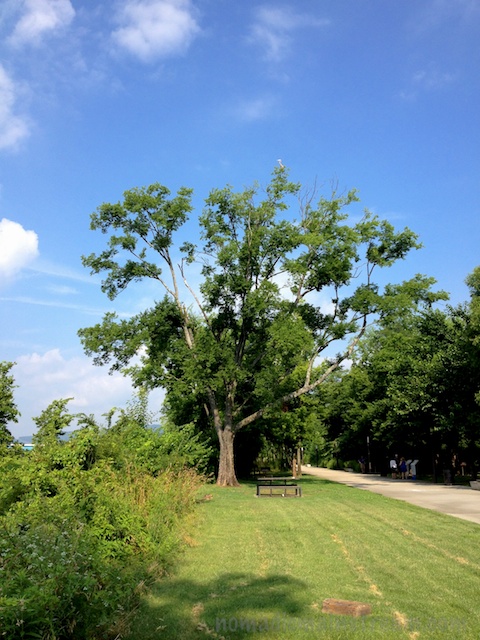 Shooting with my iPhone doesn’t allow for close-ups, but you can see the Heron just right of 12 o’clock at the top of the tree

Unfortunately, as I wrestled my iPhone out of my pocket and juggled it and two leashes to get my password entered, Twiggy spotted another dog in a different direction.  At the same time, Tisen spotted the same dog and decided he wanted to stay bolted to the spot he was currently standing on.

I cajoled and whistled and made my “come to me” noise to no avail.  Finally, the other dog moved far enough away that Twiggy and Tisen would listen to me again.  I got them down the path to where I could get a decent shot (although not all the way to my destination) just in time to catch the last few feet of the bridge closing.

I was not a happy dog walker.  When I turned, a Great Blue Heron was perched at the very top of a nearby tree.  I’m certain he was laughing at me.

Look carefully–you can see the heron laughing at me