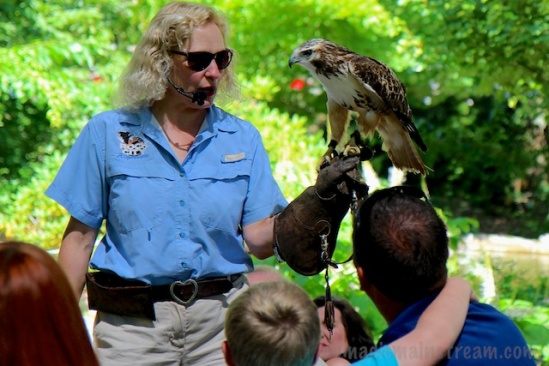 Cody getting ready to fly

(All photos in today’s post by my husband, Patrick Murray.)

In yesterday’s post, I mentioned that I have 3 parts to learn to take on the assistant’s role in the Rock City Raptors program.  In reality, the assistant normally has 5 parts.  However, to make it easier on a newbie like me, we will work around 2 of the parts when I’m subbing as the assistant.

One of the parts we’ll skip is with Cody, the Red-tailed Hawk.  Cody is even less reliable than Theo when it comes to flying.  Dale and John joke during the show that they have a radio transmitter on Cody in case he decides to go “See Rock City” when they fly him, but it’s not really a joke.  He’s been known to take off in the middle of a program and fly off into the trees if something has upset him.  Things that upset Cody can range from someone standing up unexpectedly in the audience to a wild hawk flying by to a sudden whim.

The odds that he might fly off are increased if Dale isn’t his target.  Dale seems to have a special bond with most of the birds.  Cody is no exception.

When it’s time for Cody to fly to Dale during the program, Dale takes a stance that communicates “Fly right here!” with every fiber of her body.  It seems to work most of the time–I have yet to witness Cody flying anywhere other than straight to Dale.

If determining where Cody will fly to is a problem, deciding whether he will fly at all is another.  The morning conversation goes something like this:

“Are we flying Cody today?”

Then, as the first program starts, “Are we flying Cody?”

Dale makes the call based on whether Cody is exhibiting high energy behavior, I guess.  I haven’t asked her exactly what it means when Cody is making noises that makes it more likely that he will fly. 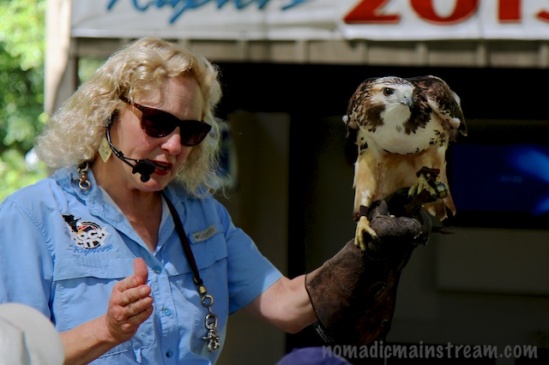 Cody looking like he’s overcome his fear of hunting

There is a backup plan for when Cody isn’t going to fly.  On those days, Dale walks through the crowd with Cody on her glove while a video of flying Red-tailed hawks plays.  It’s not quite as exciting as seeing Cody fly in person, but it’s less stressful than trying to convince Cody he wants to fly in the middle of a program.

I will not be walking through the audience with Cody on my glove.  Cody baits even more than Theo.  And, Cody is a Red-tailed hawk with giant talons that would do much more damage if I put my bare arm in the wrong place trying to help him back on the glove as I did with Theo.

I appreciate Dale and John’s concern for my safety.  I also appreciate their willingness to let me practice during low-risk times like carrying Cody from his outdoor perch back to his enclosure before the audience shows up.  I just need to learn to watch out for the stairs!