Crater Lake really is almost this blue. Shot with the Color version of tintype “film” in Hipstamatic.

From Signal Point, we loaded back into our trusty min-van, found directions to Snoopers Rock on Google maps, and headed back down Signal Mountain to drive around the base along the Tennessee River.  The drive was mostly beautifu–there were views of the river and the gorge much of the way.

Snoopers Rock is in the Prentice Cooper State Forest.  It is not only not near Signal Point, it is not even on Signal Mountain (see yesterday’s post).  But, it was a lovely day for a bit of exploring in any case.

The longest part of the drive was the gravel road from the entry to the park to the trailhead.  We happened to arrive on a day when ATVs were over-running the place.  We originally thought there must have been some kind of event there, but in retrospect, I suspect it’s just that popular to go driving around in an ATV here. 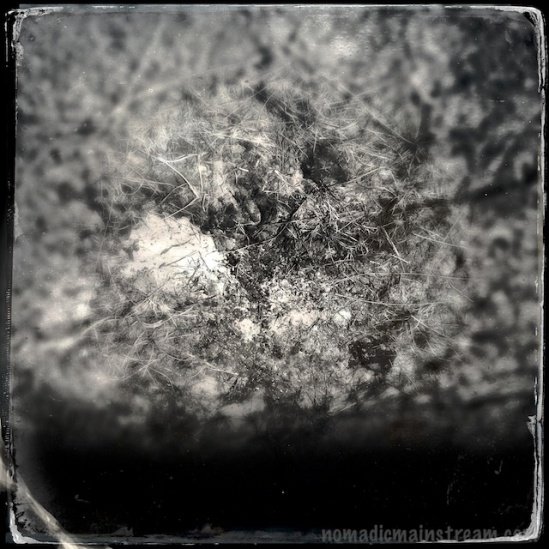 I’m not sure if I was shooting the plants in the water or plants above, but I kind of like the patch of sharpness in the midst of blur. Need to figure out which Hipstamatic lens does this

Along the way, we saw a sign for “Crater Lake.”  Thinking of Crater Lake in Oregon, our curiosity was piqued and we decided to take yet another detour.  We turned down a road that was clearly not designed for mini-vans.  We drove slowly, going up and down bumps and through muddy puddles that spoke of the popularity of ATVs here.

We made it to a grassy parking area and I suggested we were at the lake, but Pat thought we needed to go further.

The road got bumpier, rootier, and muddier the further we went.  Of course, we had no cell reception to try to figure out where we were, either.  I had a vague feeling we were going in a loop, however, and suggested we turn around. 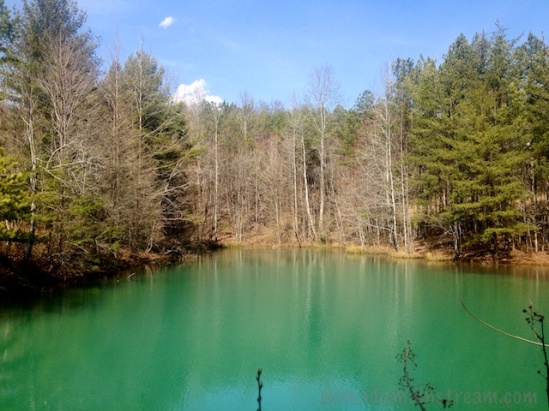 This one was shot with the Camera! App and was only slightly adjusted–this is what the lake actually looked like.

By this time, we all three needed to use the facilities.  Having quite a bit of experience with natural facilities, I worked my way through a few brambles to a bit of cover from view of the roadway.  I was glad I did when, just as I was finishing up, I heard an ATV approaching.

Pat was in the middle of turning the van around when I got back to the road.  He was also dragging the bumper over the roots at the base of a tree.  Fortunately, our van suffered more harm than the tree did.  But, tree-hugger that I am, I yelled “Stop!” as soon as I saw the bumper drag on the roots.  This was a good thing–I’m not sure our bumper would still be attached otherwise. 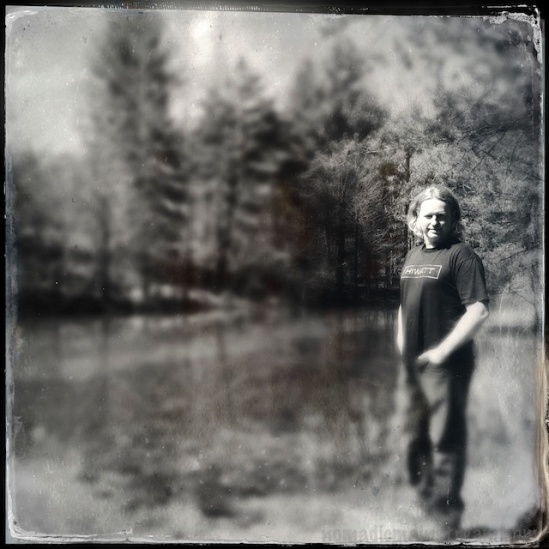 Pat posed for me in front of the lake.

We eventually made it back down the road in the direction we’d come.  Although the couple on the ATV seemed to think we might be close to Crater Lake by going the opposite direction, neither Pat nor I thought trying to turn around again was a good idea.  As we arrived back at the grassy parking area, from this direction, the lake was visible through some underbrush.  We looked at each other and laughed.  I managed not to say, “I told you so.” 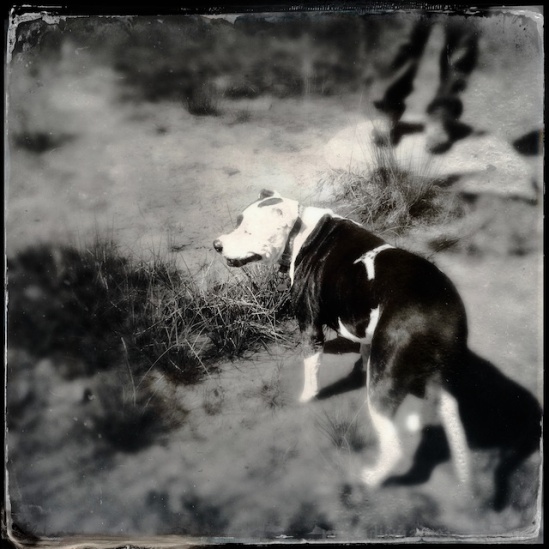