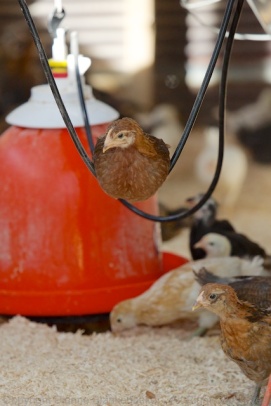 This chick likes hanging around.

Hopping off the “swing” 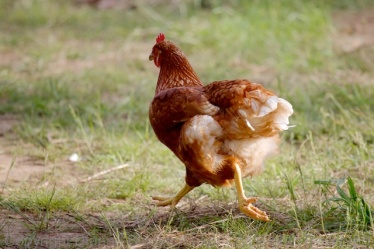 Why did the chicken cross the road?

Tom looking dapper in the sun 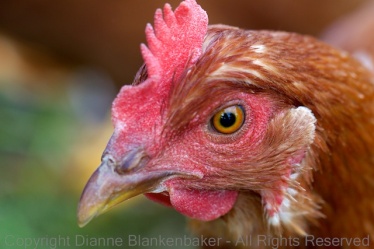 A free-range hen hanging out in the woods

Shoelaces are just too tempting

Tom and the egg carton

Meet Tom.  Tom is a Bourbon Red heritage turkey who is free-ranging it on a farm in Wildwood Georgia where the grass is green, the sun is bright, and the hens are . . . well . . . at the moment, scarce.  Tom’s Tinas are off sitting on about 20 eggs they laid in a secret hiding spot where the two hens share incubation duties of a combined nest.

What’s remarkable about this story is that Tom and his Tinas participated in the act of procreation without assistance from humans.  That happens to be one of the criteria for a breed of turkey to be considered “heritage”–they have to be able to breed on their own.

But what exactly is a “heritage” turkey?  Perhaps the best way to define a heritage turkey is to say that it is a traditional turkey from back before tradition became to factory raise turkeys who can barely walk, let alone breed.

The criteria to be a heritage turkey are:  mate naturally, have a long productive lifespan, and grow slowly.  By “long” and “slowly,” I presume what is really meant is “longer than” and “slower than” the dominant breed of turkeys used by factory farms.  You can read about it from a better resource at the American Livestock Breeds Conservancy website, which I was paraphrasing.

Tom takes the first item on that list quite seriously.  However, after spending about 15 minutes trying to convince Tom that I am not a turkey hen and only being able to divert his attention by offering the distraction of my husband, I wonder if there might be a criteria missing?  I suppose the approach of attempting to mate with anyone and anything until one of those things turns out to be a turkey hen will work as long as the hens are close, but it seems a bit inefficient.

It also made Tom a challenging model when I was trying to get pictures.  It’s hard to hold a DSLR with a heavy lens and press the shutter button with one hand while holding back a horny turkey with the other.  When I squatted down to try to get an eye-level shot, Tom rushed me.  Thankfully, Tom is persistent but not violent.  He just keeps pushing his puffed chest up against whomever has attracted his attention over and over again in this crazy dance of you pushing him back and him pushing forward.  It’s a dance with only one step in two directions.

When we got ready to leave, we pulled an empty Styrofoam egg carton out of the car only to have Tom pull it out of our hands, drop it on the ground, and proceeded to jump on top of it as if it were a Tina.  It was the most remarkable display of species confusion I’ve ever seen.  I guess it’s a good thing that how many attempts it takes a turkey to figure out who to breed with isn’t part of the heritage criteria.