The last time I ended up sitting in park, I was close enough to see the exit sign a 1/2 mile down the road

Insult to injury is being parked on the freeway and passed by an ATV. 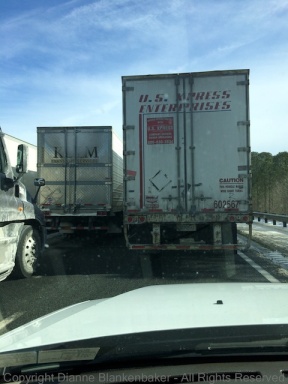 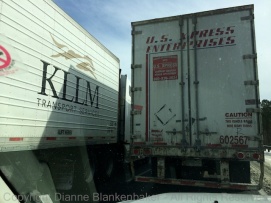 This is what I started at for nearly an hour. 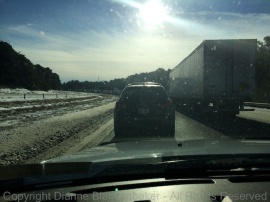 Since I don’t have any photos ready to post and it’s currently 1:27AM, I am resorting to sharing a few iPhone images I took from inside my rental car on my way to the Atlanta airport a week and a half ago.

I made a colossal error in judgment.  I knew that Atlanta had gotten into gridlock a week ago last Tuesday.  What didn’t occur to me was that they might still be in gridlock the next day.  When my flight from Chattanooga to Atlanta (on the way to Orlando) cancelled, I thought it was perfectly reasonable to rent a car to drive the 100 miles to the Atlanta airport and catch my flight to Orlando.  I wasn’t going into downtown Atlanta, just around the outer belt.  How bad could it be?

All went smoothly for the first 55 miles–it took about an hour to get just over half way to the airport.  Then, everything came to a full stop.  I spent the next 5 ½ hours trying to get to the next exit, which was about 3 miles away from where I first stopped.

At first, I thought patience was best.  I turned off the car to save fuel.  I sat in the midst of what had become a semi parking lot.  We all sat.  Then we sat some more.  A man on a bicycle appeared–he rode between the rows of parked cars for no apparent reason other than, perhaps, to be able to tell the tale of how he rode on the freeway.

Then the ATVers started buzzing by on the side of the road.  They were having the time of their lives.  The rest of us were sitting.

As calm and patient as I was feeling, the growing realization that I was going to need to heed the call of nature sometime within the next hour created a new sense of urgency–the clock was ticking.

I drove on the shoulder.  I hate this.  But, driving on the shoulder in order to exit the highway is really a favor to all.  One less car stuck on the road.  I got within a half mile of the exit when suddenly we all came to a stop yet again.

Eventually, after a man walked down to the ramp and determined a route through the parked semis to access the ramp, a line of us followed an SUV through gaps between trucks, weaving our way through until at last we were free.  It took another 3 hours to get to the airport over the back roads.

The experience of driving past hundreds of abandoned cars, some of which were sitting in the middle of traffic lanes, made me feel like I had been transported to the middle of a sci-fi thriller movie set.  Unfortunately, I also felt like part of the cast.

3 responses to “The Great Atlanta Shutdown”