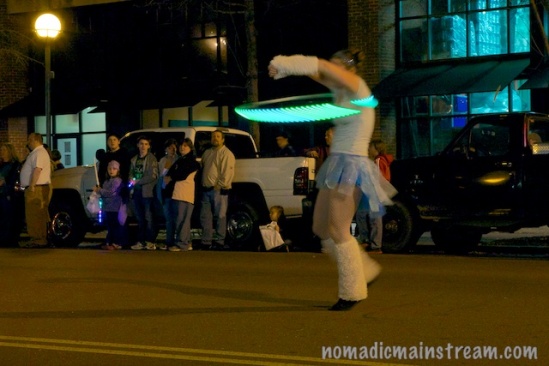 The hula hoop never seemed so exciting before.

Tonight’s images are from some of the most dynamic participants in the Starlight Parade.  I think the gymnasts were the most thrilling.  Although the fire twirlers are evocative, perhaps it just comes down to the degree of difficulty between twirling brands with burning ends and flipping and hand springing across asphalt–and, the probability of disaster.

While fire, of course, creates its own sense of danger and requires respect, the probability of lighting oneself on fire seems to be rather low, although I was concerned about one young woman’s choice to wear a gathered skirt.  The probability of falling on one’s face mid-flip onto also-known-as-cheese-grater black top seems quite high.

It could be that this is just my personal experience.  I feel relatively safe handling burning things and have actually never (knock wood) caused an uncontrolled fire.  I’ve also never burnt myself playing with sparklers, candles, burning marshmallows (which strikingly resemble the firebrands twirled in the parade), campfires, camp stoves, or grills.  I believe the only non-cooking-related fire injury I’ve ever suffered from was when I tried to light a bunch of birthday candles with a lighter and the metal part of the lighter overheated and burned my thumb.  It was only a minor burn.

While I’ve had my share of bad burns in my lifetime, none of them have involved flames.  What woman my age didn’t at some point accidentally brand her neck with a curling iron?  Or get in a hurry and grab a pan out of the oven without getting a hot pad first?  Or how about wipe out on a moped and get a third degree burn from the muffler?  We’ve all done that, haven’t we?

And speaking about wiping out on a moped, this brings me back to the fear of asphalt.  The most painful accident I ever had (including many broken bones) was when I took a ride hand turn on my bicycle way too fast for the space I had.  I was turning onto a narrow side street coated with what’s fondly known as “chip and tar.”  Instead of the smooth goo they put down for asphalt, they spread a layer of fine gravel and then spray it with a tar coating to stick the gravel in place and keep the dust down.

My rear wheel slipped across loose pieces of gravel.  I went down hard enough to slide about a foot or so.

When I got up and looked at my knee, I pretty good chunk of it was missing.  I looked more carefully and realized there were fine curly-queues of a substance resembling wide dental floss coming out of my knee.  I later learned they were “shavings” off the tendon below my skin.  Still gives me the creeps to think about it.

In the end, I have come to the conclusion that the human brain works very simply when it comes to fear:  We fear what we most know to be terrifying. 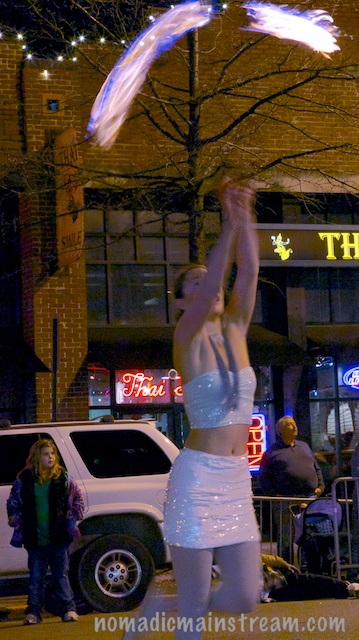 This woman is marching, looking straight up, and twirling firebrands. I’m impressed.

Father and daughter watch the parade next to me. 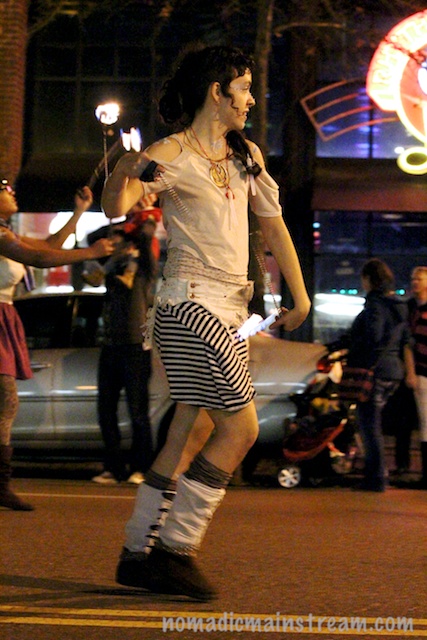 I was really worried she was going to catch her skirt on fire. 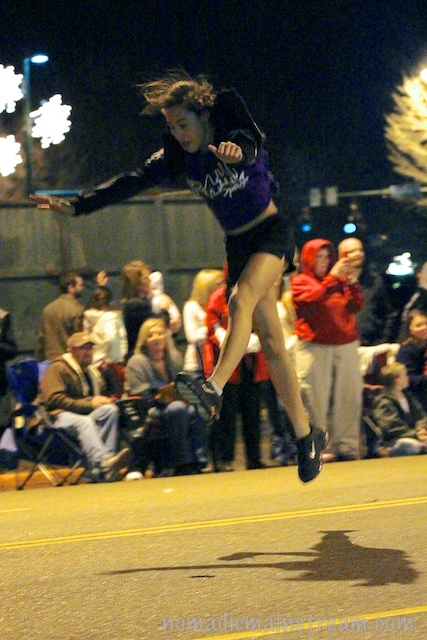 Gymnast and shadow about to be re-introduced.

This guy was fearless on the asphalt street.